Grover Norquist, Chris Christie, Scott Walker, amongst many other conservative gasbags, are ramping up their efforts to belittle unionized public workers. They're selling their well-worn "privatization" snake oil as our savior; while blasting unions as our nemesis.
But, as I posted recently, aid to state and local governments is one of the five most stimulative spending initiatives the government can engage in. For every $1.00 invested in state and localities, $1.41 is returned. A very good bang for the buck. 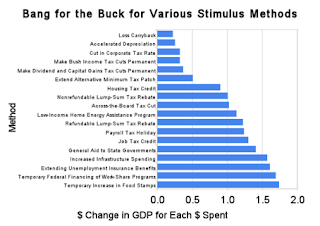 Public workers not only provide services we all count on (even if they are rarely thought about or acknowledged by most citizens) but they also spend their earnings in their community - helping to create jobs, stabilize businesses, and support other economic activities.
As government has stepped aside over the past 40 years - with deregulation, less oversight, lower taxation, less unionization - we have seen a proportionate increase in inequality. More privatization and less government have been the trends pulling apart our society. To put this misguided strategy on steroids during the second worst economic downturn in history is suicide. If our goal is a continued concentration of wealth amongst a select few, this might be the way to go. If we'd rather experience a shared prosperity and increasing quality of life, we need government and unions to reassert their crucial role in our public dialogue and social contract.
The private sector, deregulation, the "business climate," the anti-tax cabal, and a host of other conservative "principles" have caused our volatile economy. It is time they stand-up and take responsibility for their actions. Where is their accountability? Their paradigm has handcuffed a generation with debt, low wages, no retirement, and no health care. And they want us to believe that more of this bogus worldview will, after failing for the past 40 years, suddenly, and finally, lead us to paradise.
The government and unions don't have all the answers. And, we can certainly find more efficiencies. We should remember this is true of the public AND private sector. But with government being the same size (when adjusted for population) as it was in the 1970s and with unions representing only 10 percent of the total working population, to keep blaming these two entities as the cause of all our fiscal problems is an exercise in elaborate delusion.
Unions and the government were largely responsible for the middle class. They enabled Social Security, Medicare, weekends, employer provided health care, pensions, labor and employment laws, minimum wages, workplace safety standards, amongst may other worker-friendly initiatives. As we've allowed more and more of the private sector to displace government and unions, we have seen a proportionate and precipitous decline in our quality of life, with an increasing amount of inequality.
This hyper-privatization, pro-business model has failed everyone but a select few. This is obviously not the answer. It's time we re-appreciate the public sector and the good that government can do for us all.
Posted by Ryan at Sunday, December 26, 2010