Meet the man who may end gerrymandering: A retired Wisconsin law professor’s Supreme Court case could save democracy

The case with the most promise to deliver a lasting judicial remedy is Whitford v. Gill, from Wisconsin, which advances a fascinating standard called the “efficiency gap.” It is the brainchild of law professor Nicholas Stephanopoulos and political scientist Eric McGhee, but has an elegant simplicity that is easily understandable outside of academia. If gerrymandering is the dark art of wasting the other party’s votes – either by “packing” them into as few districts as possible, or “cracking” them into sizable minorities in many seats – the efficiency gap compares wasted votes that do not contribute to victory.

In November, a panel of federal judges smiled upon this standard and ruled that the state assembly districts drawn by a Republican legislature in the Whitford case represented an unconstitutional partisan gerrymander. “Although Wisconsin’s natural political geography plays some role in the apportionment process, it simply does not explain adequately the sizable disparate” advantage held by Republicans under these new maps, wrote the court.

The judges ordered new state assembly maps in time for the 2018 election – a big deal, considering these district lines have helped give Republicans their largest legislative majorities in several decades, despite years in which Democratic candidates receive more votes. But just as important, it accepted the “efficiency gap” rationale and sent it toward Justice Kennedy. If Kennedy finds it workable, it would become much more difficult for politicians to choose their own voters and rig maps in their favor.

Republicans steal the selection from the Democrats, then bitch because Democrats aren't letting them get away with it.

For Further Reading:
A short history of right-wing lies in Supreme Court confirmation hearings
Posted by Ryan at Sunday, March 26, 2017 No comments:

Fox News Takes The Words Right Out Of Trump's Mouth

Fox News host Judge Jeanine Pirro, whose show President Trump urged his followers on Twitter to watch earlier in the day, opened her program on Saturday evening by calling on Speaker Paul Ryan (R-Wis.) to step down.

"Ryan needs to step down as Speaker of the House. The reason, he failed to deliver the votes on his healthcare bill, the one trumpeted to repeal and replace ObamaCare," Pirro said in her opening statement.

Barack Obama One Of The Most Consequential Presidents In American History

He signed into law a comprehensive national health insurance bill, a goal that had eluded progressive presidents for a century — and built it strong enough to withstand assaults from the Supreme Court and avoid repeal from a Republican administration. He got surprisingly tough reforms to Wall Street passed as well, not to mention a stimulus package that both blunted the recession and transformed education and energy policy.

He's put in place the toughest climate rules in American history and signed a major international climate accord. He opened the US to Cuba for the first time in more than half a century, and reached a peaceful settlement to the nuclear standoff with Iran.


The bombshell revelation that U.S. officials have information that suggests Trump associates may have colluded with the Russians means we must pause the entire Trump agenda. We may have an illegitimate President of the United States currently occupying the White House.

Other than allowing routine governmental functions, there must be a total and complete shutdown of any agenda item being pushed by the Trump Administration. Congress cannot continue regular order and must stop voting on any Trump-backed agenda item until the FBI completes its Trump-Russia collusion investigation.

Congress must immediately form an independent commission and appoint a special prosecutor to investigate the collusion allegations with impartiality and independence. Congress also needs to pass the Resolution of Inquiry, authored by Rep. Hakeem Jeffries and I, to compel the Trump Administration to publicly disclose information on its Russian ties to the American people. At this point in our nation's history, there is nothing more important than finding out whether or not high crimes were committed by associates of Donald Trump or possibly by Trump himself.  [source]

For Further Reading:
Did Putin Direct Russian Hacking? And Other Big Questions
Posted by Ryan at Saturday, March 25, 2017 No comments:

Should Milwaukee Sheriff David Clarke continually be using the Milwaukee County Sheriff's Facebook page to disparage the City and the Mayor of Milwaukee? Was that page created for Clarke to settle personal vendettas?

Clarke just used the murder of a City of Milwaukee worker as a springboard for his right-wing talking-points and criticism of Milwaukee, the Mayor, the police and the media. 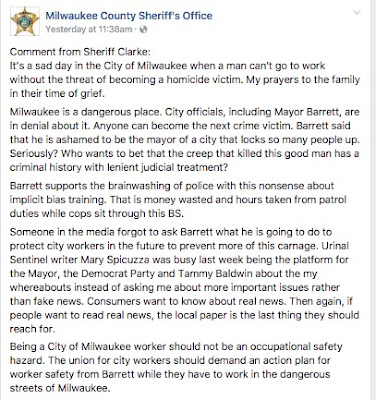 Again, Clarke is using anything and everything - even a tragic event like this - for political gain. What a low-life.
Posted by Ryan at Friday, March 24, 2017 No comments:


In July 2016, a newborn baby died at the Milwaukee County Jail after the mother was forced to give birth on her cell floor. Now, three months after Milwaukee Sheriff David Clarke’s Office was sued over the baby’s death, the controversial law enforcement leader is being sued for additional jail abuse of pregnant women.

According to a federal lawsuit filed on March 14, plaintiff Melissa Hall was shackled before, during, and after childbirth at a local hospital in 2013. A “belly chain” was allegedly wrapped around her waist when she needed to use the restroom, and she had “her wrists attached to the waist and her legs attached to one another by leg-irons.” Hall claims the jail deputies also denied medical providers’ request to take the chains off her during childbirth, which made it difficult for those providers to give her an epidural.

How Milwaukee Shook Off The Rust
Mark Cuban Rips Trump As The Zoolander President
Scott Walker's Promise To Create 250,000 Jobs In Wisconsin Remains Elusive
One Way To Counter Job Killing Robots: Stop The Federal Reserve Board From Raising Interest Rates
What Is Unemployment?
Trump's Industrial Rebirth Is A Dead End
The Truth About Obama's Economic Legacy And Trump's Inheritance
That $1.9 Trillion Cost Of Regulation
Posted by Ryan at Sunday, March 19, 2017 No comments:

If one were to attempt to intervene to protect a woman and child from a drunken, tire-iron wielding doofus, for most sane and civil people, this would not elicit ridicule and insults. Many would probably even say it was an act of courage or bravery, or, at least, the right thing to do considering the circumstances.

But in the self-serving, opportunist, know-nothing, faux-cowboy world of Sheriff David Clarke, trying to defend a woman and child, and being unable to withstand body blows form a tire iron, makes a person a wimp.

“The last time Tom Barrett showed up at a crime scene he got his ass kicked by a drunk, tire-iron-wielding man who beat him within inches of his life," Clarke said in the lengthy post. "The milquetoast mayor trying to play cop foolishly thought he could simply talk the man who beat him senseless into backing down. Bet he won't try that again!" [source]

Barrett, in response to a reporter's questions, stated a couple a facts about Clarke. Clarke has been more interested in being a right-wing, talking-point parrot than in doing his job as the Milwaukee County Sheriff. Barrett also mentioned that he has never seen Clarke at a crime scene. I guess reality really pisses Clarke off.


Barrett set Clarke off when he said in a TV interview earlier this week that the sheriff has a “great gig going right now: He’s fighting crime one conservative cable TV show at a time.” He said everyone knows that Clarke “rode his horse out of town a long time ago.” [source]

Just like his idol, Donald Trump, Clarke doesn't like the real world. If things don't comport with Clarke's distorted world view, something is wrong with the world, not his perspective.

So this is where we are at now. When presented with facts, the right-wingers and Trumpsters hurl insults and threaten violence. Forget using your brain. When the truth doesn't fit into your political paradigm, time for pitchforks and torches.

Are we interested in actually electing public servants? Or do we just want cartoonish caricatures of Wild West buffoons?

Clarke not only ridiculed Barrett (for an act of bravery), he then did what all Wisconsin Republicans love to do - he took shots at Milwaukee. According to Wisconsin Republicans, Milwaukee is a crime-ridden hell-hole. Maybe if Clarke actually set foot back in Milwaukee one of these days (instead of doing the conservative talk show circuit) he would see all the activity and development taking place. And, as Bruce Murphy recently pointed out, Milwaukee Subsidizes The State.


The city gets only 66 cents in state spending for every dollar in state taxes paid.

So while the Republican playbook has been bankrupting states and cities across the country, Democratic places, like Milwaukee, are on the ascent. While Scott Walker's policies haven't done anything near his campaign promises, Mayor Barrett has overseen a boom in Milwaukee jobs and development.

Let's also not forget that Republicans are supposed to be the party of morals, family values, honor, country, dignity, blah blah blah. Yeah, it's all just a facade. There are no principles underlying any of their proclamations. Their opinions morph as needed. And, the saddest part is all the people that support and parrot the rhetoric. Still towing the party-line and supporting these ever-changing opinions and policy prescriptions. Just look at the faces of their party - Donald Trump, Jeff Sessions, David Clarke, Steven Bannon, KellyAnne Conway. All lying, racist, sexist, self-serving, know-nothings only concerned with maintaining power. How can honest, America-loving conservatives look themselves in the mirror and believe any of this rhetoric or that these opportunists are good for the country?

Wake up, people! Time to see past the smoke, mirrors and vitriol. Sheriff Super-Douche and his band of destructive deplorables are not interested in you or your well-being. Please help us make this a functioning democracy again. Democrats are not perfect, but truth, reality and governance still mean something to them.

This is all so fucked up it's flabbergasting.
Posted by Ryan at Sunday, March 19, 2017 1 comment:

Mister Rogers Defending PBS To The US Senate


The American Health Care Act would make a low-income 64-year-old in the individual market pay more than half his income for health insurance.

Trump Wants Credit For Cutting The National Debt. Economists Say Not So Fast
'Most Liberal Governor' Rights Ship In Minnesota
Best Returns Since 1900 Came From These Markets
Wisconsin Senators Approve 31% Raise In Their Per Day Expenses
State's Image Has Turned Upside Down
Revoking Trade Deals Will Not Help American Middle Class
Stop Blaming India And China For The West's 300 Years Of Destroying The Environment
Neoliberalism: The Deep Story That Lies Beneath Donald Trump's Triumph
Judicial Originalism As Myth
Posted by Ryan at Sunday, March 05, 2017 No comments: