The Market Has Spoken

Just eliminate the debt ceiling.
Posted by Ryan at Monday, July 18, 2011 No comments:

Milwaukee's been losing population since the 1960s, but the release valve's shutting quickly as the losses trickle to less than a percent -- the best population news Milwaukee's received since the city grew 16.3% during the 1950s -- and the city gets younger.

You don't have to set foot in the Santiago Calatrava-designed Quadracci Pavilion at the Milwaukee Art Museum, place a complicated order at Alterra Coffee, buy rounds of organic and gluten-free beer at Lakefront Brewery or see the city's starring role in Bridesmaids to realize that Milwaukee's changed quite a bit in the past decade. Those may, however, be some of the best indications of the city's youth movement that dropped the median age from 30.6 in 2000 to 30.3 last year, well below the nation's average age of 36.8.

As a result, the town once known for dying breweries and Happy Days reruns is ending up in some fairly enviable places, including the Daily Beast's list of the Best 50 Cities For Love and No. 9 on Forbes' list of Best Cities for Singles. A city rivaled only by Las Vegas for most bars, clubs and restaurants per capita, Milwaukee's GDP has grown enough to keep the taps flowing with a boost from $78.9 billion in 2006 to roughly $83 billion today behind growing companies such as Manpower and a reduced dependency on traditional employers such as MolsonCoors' Miller.

Though the Brewers aren't blowing the retractable roof off Miller Park and the Bucks have teams fearing the deer a little less in recent seasons, a Super Bowl win by a certain team in the suburbs is enough to give local fans something to cheer about. With all the museums, galleries, music venues and watering holes to visit, however, it's tough to fit the local teams into the schedule."

Heads I Win, Tails I Win.

"Business" men get paid regardless of how they perform.
Run a bank into the ground and you're rewarded with millions, and offered millions to keep "running" the bank.
Ed Garvey writes, "M&I Bank was, as you know, sold to a Canadian company. The men who negotiated the deal took care of themselves! "This is just the way things are done these days" said one apologist. Maybe. Mark Furlong, president and CEO got $18 million and $6 million per year if he stays on. Sixteen other executives will get almost $47 million in cash."
Posted by Ryan at Sunday, July 17, 2011 No comments:

Get Off My Lawn! 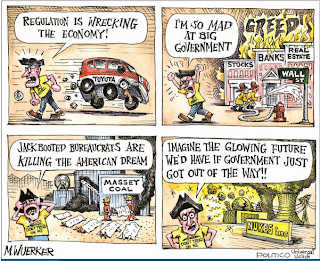 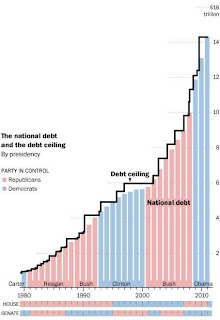 Thirty years of the debt ceiling in one graph.
Posted by Ryan at Sunday, July 17, 2011 No comments:

Why is it that even though numerous studies and analyses have found public workers total compensation is LESS than comparable educated and experienced private sector workers, we still hear and read, on an almost daily basis, about public workers lavish pay and their extravagant benefits?
Compound this with the facts that public workers actually provide services to taxpayers and those services have been found, a majority of the time, to be cheaper than the privatization of such services. Whomever [Republicans and Wall Street] decided our economic ills were the fault of government and public employees has led us astray and distracted us from the real causes and culprits.
Comparing Public & Private Sector Compensation Over 20 Years
Correcting Myths About Federal Pay
The Myth of the Overcompensated Public Employee
Public Disregard
Ulterior Motives
Union Facts
The Wage Penalty for Government Employees
Wisconsin Government Employment Levels
Workers Versus Plutocrats
Posted by Ryan at Sunday, July 17, 2011 1 comment:

Ronald Reagan tripled U.S. debt. George W. Bush doubled it. Over the past 30 years, Republicans have been the party of frivolous spending. Lavishly rewarding cronies while punishing the poor and working class.
Republicans sudden concern with debt and deficits has nothing to do with job creation nor economic policy. Just more Republican flip-flopping with the hope of political gain.
Posted by Ryan at Saturday, July 09, 2011 No comments:

Republicans committing fraud by refusing to raise the debt ceiling.
Posted by Ryan at Saturday, July 09, 2011 No comments:

During real jobs crisis, our two political parties are discussing how to make it worse.
Posted by Ryan at Saturday, July 09, 2011 No comments:

If you do drugs and you're poor we'll throw you into the streets. Actually you will just lose your unemployment benefits. But if that's your only income, you'll probably end up in the streets.
But, if you're wealthy and you received subsidies, giveaways, tax breaks, low-interest loans and a host of other handouts from taxpayers; and your casino-type speculation helped bring down the world economy; don't worry about punishment or an end to the giveaways. In fact, we'll find ways to make the poor and working-class citizens sacrifice even more so that you can have more handouts from taxpayers.
If you smoke a joint you will no longer receive your less-than-$300 weekly unemployment check. Yet, if a corporation's greed and speculation (partially funded by taxpayers) happens to collapse the economy, it's perfectly OK for that CEO to spend $1.2 million to redecorate his office, while continuing to receive taxpayer dollars. This dichotomy perfectly illustrates the inequity of our public policies.
American "democracy" at its finest.
Posted by Ryan at Saturday, July 09, 2011 No comments:

We Have A Revenue Problem

The U.S has the third lowest total taxes (as a percent of GDP) among 28 OECD countries.

The U.S. has the second lowest corporate taxes (as a percent of GDP) among 26 OECD countries.

U.S is one of least taxed developed countries.
Posted by Ryan at Monday, July 04, 2011 No comments:

"The final figures show that the median pay for top executives at 200 big companies last year was $10.8 million. That works out to a 23 percent gain from 2009," reports Pradnya Joshi.
Posted by Ryan at Sunday, July 03, 2011 No comments:

Elections have consequences. State budget cuts have consequences.
As James Rowen notes, Big Teacher Layoffs Announced for Milwaukee; Another Walker Jobs Success.
Milwaukee has roughly 350,000 working-age citizens. If we use an average yearly total compensation of $50,000 for each of the 350 teachers being laid off, this works out to $50 per year, per working-age taxpayer, to fund these 350 teachings positions. The "savings" from these layoffs is a minuscule part of the overall budget. Walker has taken an ax, rather than a scalpel, to the budget.
It's one thing to cut wasteful programs. No one would argue against such. It's quite different to butcher a crucial pillar of being a competitive economy - our schools. And, it's especially egregious when one does this while claiming the sky is falling and while also giving millions away in corporate tax breaks.
Scott Walker has no problem initiating hundreds of millions of dollars in corporate tax cuts, while simultaneously slashing education spending. Big businesses already complain about the lack of skilled workers. How will increasing class sizes and demoralizing our public education system help to provide a more robust and skilled workforce?
As I noted in an earlier post, Walker wants the state to borrow $75 million to combine museums of state history and veterans into one 200,000 square foot building. Walker also wants almost $119 million to replace the Department of Transportation's headquarters." We're broke, but we have $200 million for two non-essential buildings?
So...during a recession, a few of the highest priorities for our governor are: unnecessarily combining two museums, replacing the public headquarters of the department involved with the road builders (a huge Walker campaign contributor), and downsizing our educational system.
The recall elections can't happen soon enough.
Posted by Ryan at Friday, July 01, 2011 No comments:

Is Goldman Sachs Buying Your City?
Posted by Ryan at Friday, July 01, 2011 No comments:

Budget serves up tax breaks for wealthiest Wisconsinites.
"Walker's budget creates two new provisions to provide income tax shelter for capital gains."
"The new exemptions will reduce revenues by $16.1 million in 2011-12 and $20.2 million in 2012-13. Once fully phased in by 2016, tax collections would fall by over $100 million annually."
Posted by Ryan at Friday, July 01, 2011 No comments:

All Work and No Pay: The Great Speedup
How State Are Rigging The 2012 Election
How The U.S. Detoured To Massive Debt
Mr. Keynes & The Moderns
Overworked America
7 Things About Debt, Deficits, & The Dollar
Supply-side Nonsense
Tax Cuts Don't Pay For Themselves
The Illusions of Psychiatry
The Truth About Wisconsin's Budget, Taxes & The Phony Crisis
Who Doesn't Pay Federal Income Taxes
Posted by Ryan at Friday, July 01, 2011 No comments: