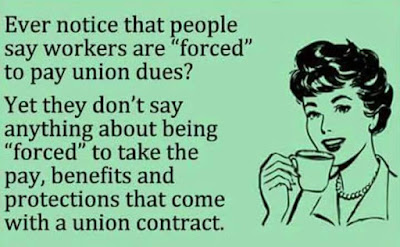 Caterpillar (and former Bucyrus) has received $40 million in state and local awards (subsidies) in Wisconsin. [source]

Since Reaganomics began eviscerating the middle class, mergers and a bigger-is-better attitude has dominated our development and economic thinking. Economies of scale were going to trickle down riches on each and every one of us.

But, it turns out, much of this was just merely oligopoly power solidifying itself. Big companies became too big to fail, and the wages of most workers stagnated.

In our haste to believe that all we'd learned from the Great Depression was wrong, we marched ahead cutting taxes, cutting regulation, getting government out of the way of all-knowing business. Zoning laws changed and development intensified.

The small mom-and-pops, which were the hubs of smaller communities throughout the nation, were inefficient and antiquated. Travel patterns were changed. The off-ramp economy was the path to prosperity. A new automobile-dominated society was deemed superior. Big boxes and one-stop shopping were supposed to transform daily life, for all, for the better.

But what happens when the oligopoly changes the lifestyle in a community, only to desert it years later?

First, the traffic to-and-from these megaplexes disrupts as much as it invigorates:


Traffic and noise depress property values in nearby neighborhoods. More traffic in- creases the cost of local government services, such as road maintenance and police. [source]

Many of these big boxes also use their size and strength to avoid taxation:

As one example, take Walmart, the largest among them, which looks for tax loopholes wherever it can find them. “For every kind of tax that a retail company would normally pay or remit to support public services, Walmart has engineered an aggressive scheme to pay less and keep more,” found a 2011 report by the non-profit research organization Good Jobs First. These include using its fleet of lawyers to systematically challenge its property tax assessments, and gimmicks such as deducting rent payments made to itself through captive real estate investment trusts. Good Jobs First calculated that these tactics cost state and local governments more than $400 million a year in lost revenue, and concluded, “Walmart may be more of a fiscal burden than a benefit to many of the communities in which it operates.”

Much of the cost for the employees at these big boxes is placed upon the locality and the state:


Large numbers of big-box employees rely on Medicaid, food stamps, and other public assistance programs to get by. Several states have reported that their Medicaid rolls are now swollen with su- perstore workers. In 2005, for example, Massachusetts disclosed that some 9,500 Wal-Mart, Home Depot, and Target em- ployees and dependents were receiving publicly-funded health care at an annual cost to taxpayers of over $12 million.

Perhaps most disturbing, researchers at Penn State University, after controlling for other factors that influence poverty, found that counties that gained Wal-Mart stores during the 1990s fared worse in terms of family poverty rates than those that did not. [source]

It's also been found that these big boxes hurt the local job market:


As these businesses are forced to down- size or close, the resulting job losses typi- cally equal or exceed the number of new jobs created by the big-box store.This was recently shown in a large-scale study con- ducted by Univ. of California economist David Nuemark and his colleagues at the Public Policy Institute of California. The study examined 3,094 counties across the U.S., tracking the arrival of Wal-Mart stores between 1977 and 2002.

The study found that the opening of a Wal- Mart led to a net loss of 150 retail jobs on average, suggesting that each Wal-Mart em- ployee replaces approximately 1.4 workers at other stores.

And when they leave, they typically leave blight behind. As the Institute for Local Self-Reliance discovered:

These stores tend to remain vacant because retailers often continue paying rent or take other steps to block competitors from occupy- ing the site. Clauses in many big-box lease agreements forbid property owners from leas- ing the building to another company without the original tenant's approval.

They come to town, change the traffic flow and the character of the place, they push many of the costs of their employees onto the locality and the state, they avoid their fair share of taxes, they pocket a financial windfall, and then they leave town.

When it comes to economic development, place-making and community, bigger isn't always better.

For Further Reading:
Walmart: It Came, It Conquered, Now It's Packing Up & Leaving
The Perils Of Walmart Dependence
Big, Empty Boxes
Impact of Big-Box Stores on Taxes and Public Costs
Posted by Ryan at Sunday, January 31, 2016 No comments:

Where Are The Conservative Calls For Accountability For Corporate Welfare Recipients?

Johnson Controls Announces Merger With Tyco International; Company To Be Based In Ireland

The rejiggered corporate structure will allow the new company to reel in $150 million in tax savings.

However, saving taxes was not the primary motivator for the deal, the company said. Though the merger includes the tax shift, "it's not about the foreign domicile," said company spokesman Fraser Engerman. "This is all about strategy."


"Here is as direct an example of what's wrong with the thinking and acting of an American corporation that we could get," Clinton said.

She told supporters at a bowling alley here that "I will do everything I can to prevent this from happening, because I don't want to see companies that thrive, use the tax code, the gimmicks, the shenanigans...to evade their responsibility to support our country."

Clinton said that during the economic and financial crisis of 2008, Johnson Controls was among the companies "that begged the administration and the Congress to help bail out the auto industry."

"And the auto industry, the suppliers, the jobs, were saved. OK. But just in the last few days Johnson Controls announces it's going to pretend to sell itself to a company in Europe to escape paying taxes to the United States government. It's called an IN-version. I think it should be called a PER-version."

Clinton told the audience that the company was happy to accept their help during the crisis.

"Now they want to move overseas for the sole purpose of escaping their fair share of taxes to support what made them be a company that was successful in the first place — the rule of law, the contract system, our judicial system, the support we give to training people, all that you and I have contributed in previous generations. They are willing to walk away in order to pay a lower tax instead of doing what they should to support our country to grow and be prosperous and strong in the future and it is wrong."

Clinton added: "We've got to take all of these abuses on...We have to go after everybody who is trying to undercut American prosperity and America's future."

Confusion About The Financial Crisis Won't Die
Will Bill Privatize Water Utilities?
Is Ted Cruz Right About The Federal Reserve & The Great Recession?
Bill Would Limit City Control Of Development
Zoning Laws Transfer Wealth In The Wrong Direction
The Case Against Bernie Sanders Is Dumb
Can New Approach End Gerrymandering?
Posted by Ryan at Sunday, January 31, 2016 No comments:

Union Decline Leads To Wage Decline For All

5 States Where the Middle Class Is Being Destroyed

The clear winner (or loser) in the race to the bottom has been Wisconsin, losing 5.7% of its middle class households since 2000. Average median income has dropped by roughly $9,000 annually, and costs of living have gone up as well. There have also been many political battles that have not worked in the middle class’s favor. Governor Scott Walker gutted many of the state’s unions — which has a big effect on the middle class — and all signs seem to indicate that he will aim to implement similar policies. Like Ohio, Wisconsin’s makeup was particularly vulnerable to a recession, and the proof is in the numbers.

Union Membership In Wisconsin Plummets In Wake Of GOP Measures 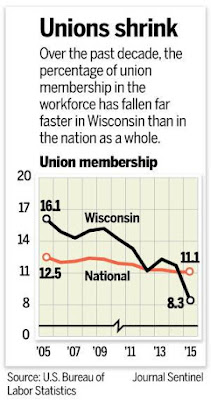 For Further Reading:
62 Richest People On Earth Hold As Much Wealth As The Poorest 3.5 Billion 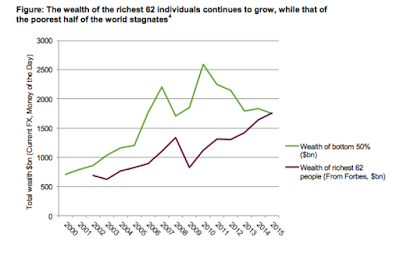