Government Health Programs Save Everyone Money


More and more it seems that, when the government subsidizes health insurance, patients' share of health care costs go down.

The latest evidence: In the years immediately following the implementation of Medicare and Medicaid -- two programs that dramatically expanded government-sponsored health coverage -- patients’ share of out-of-pocket costs dropped by 40 percent, according to a December paper from Jeffrey Clemens, an economist at the University of California at San Diego. Out-of-pocket costs are what patients are responsible for paying on their own. In the case of insured patients, those costs can include copays and deductibles. Uninsured patients typically have to pay for all of their medical services “out-of-pocket.”

The explanation for the precipitous drop in patient costs is somewhat obvious, said Clemens.

"The period right around 1965 had such a large drop because a pretty substantial fraction of seniors basically didn’t have insurance against hospital episodes and office visits at that time," he said. "Covering that population just kind of mechanically meant that people were paying way less out of pocket when they had the need to go to hospital."

The study adds to a growing body of evidence that these government entitlement programs helped cut health-care cost burdens for struggling consumers. Just 16 percent of funding for personal health care came from out-of-pocket payments in 2003, down from 55 percent in 1960, according to a 2005 study from the Department of Health and Human Services.

And Medicaid alone kept at least 2.6 million people out of poverty in 2010, according to a recent paper in the Journal of Health Economics.

If the pattern holds, the Affordable Care Act, also known as Obamacare, could lead to even more cost savings. Out-of-pocket health-care costs will drop from $1,463 to just $34 per year in 2016 for the 11.6 million low-income Americans who are expected get health coverage as a result of the law’s expansion of Medicaid, according to an October RAND study. 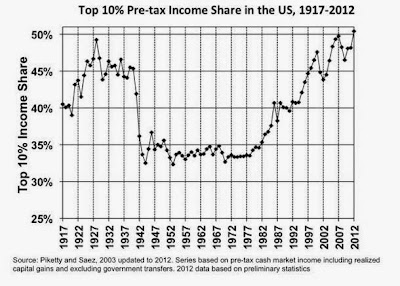 The Strange Case of American Inequality

But, for everyone else – roughly 90% of the US population – there has been no jump in income share relative to ten or 20 years ago to offset what now looks to be a permanent lost decade. On the contrary, the bottom 90% has continued to lose ground. 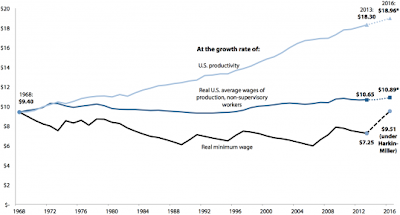 * Productivity and average wage projections from 2013 to 2016 do not include the Harkin-Miller proposal. [source]

"If the minimum wage had grown at the same rate as productivity, it would be $18.30 today," reports David Cooper of the Economic Policy Institute.
Posted by Ryan at Sunday, December 29, 2013 No comments:

Rotten To The Core?

The Journal Sentinel believes Common Core Standards Are Working; They Need To Stay.

Why Shopping At Walmart Is No Bargain
Raising The Minimum Wage: Old Shibboleths, New Evidence
Is Service Work Today Worse Than Being A Household Servant?
It's Business That Really Rules Us Now
Thorstein Veblen's Critique Of The American System Of Business
NFL On Defense With Tax Break
California's Finances Improving Faster Than Expected
Right Vs. Left In The Midwest
After Less Than 20 Years, Atlanta Braves To Get New Stadium
Posted by Ryan at Tuesday, December 24, 2013 No comments: 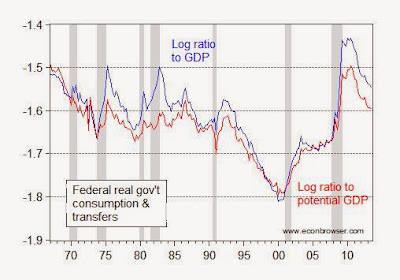 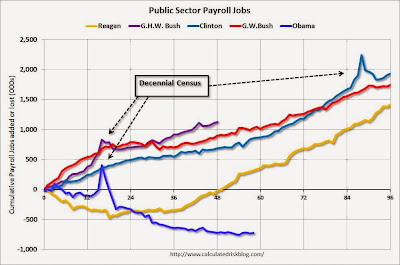 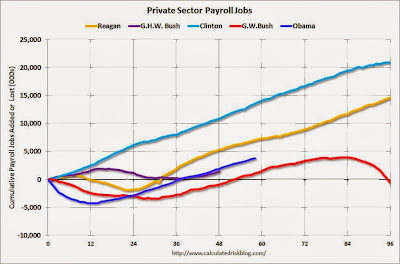 
A small way to attack the chronic problem of wealth concentration is to modestly boost the federal minimum wage.

As Maura Stephens, of Alternet, reported, "If the minimum hourly wage had advanced with the cost of living and productivity from its high-water mark of 1968, it would have been $21.72 in 2012, according to a March 2012 study by John Schmitt for the Center for Economic Policy and Research." Over the past few decades, our economy has experienced an increasing rate of GDP per capita - a growing economy. Yet, this bounty hasn't found its way into the wages of most workers. Workers haven't shared in this growing prosperity. Here's a series of graphs that speaks volumes about the disparity between wages and general economic growth over the past few decades. 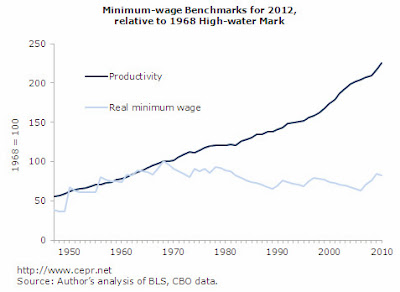 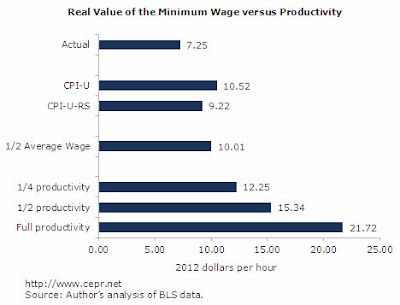 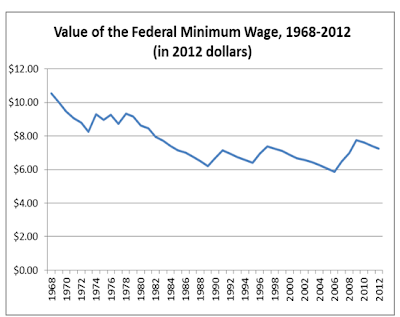 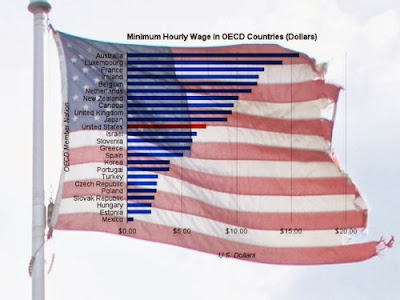 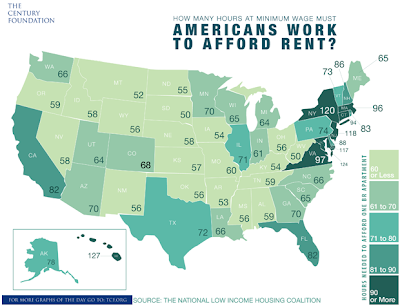 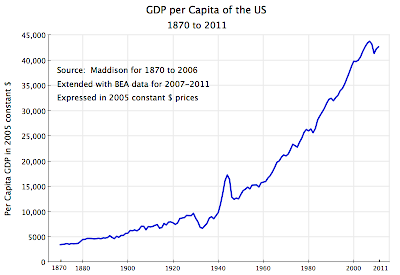 For Further Reading:
The 40-Year Slump
Minimum Wage Misconceptions
Why Does the Minimum Wage Have No Discernible Effect on Employment?
The Minimum Wage Is Too Damn Low
Posted by Ryan at Thursday, December 05, 2013 No comments: