Give Reality Back To Taxpayers

Lt. Gov. Rebecca Kleefisch took to the Journal Sentinel to boast about all Scott Walker has done for Wisconsin and to propose giving the budgetary "surplus" back to the taxpayers.

If you consider borrowing, increasing long-term debt, as a "surplus," then Scott Walker has really been on point. Yet, as most can see, this is merely kicking the can down the road. A bit of smoke and mirrors for Mr. Walker, so he can present the illusion of positive policy outcomes. But in reality, he's just burying Wisconsin is debt so he can advance his own political career.

To come up with her rosy picture, Kleefisch compares the Walker administration's tenure with the peak of the recession. One would expect improvement after hitting rock bottom. They could have taken office and done nothing and things would have shown some improvement. For a truer test, we need to see where we were at before the recession. To show real gains one would expect improvement above and beyond the norm, and improvements that rank near the best among states, especially if one is going to claim his or her policies are doing so much good.

As you can see from the graph below, its awfully convenient to choose 2010 for comparison, rather than any other time before that. When we look back just a bit further, we see Wisconsin still has a way to go to reach full employment. Our current unemployment rate ranks us 22nd among the states. In 2011 and 2012, although we had higher unemployment rates (6.9 and 7.5), we ranked 19th among the states for both years. As far as the state is doing compared to others, we've actually gotten worse. 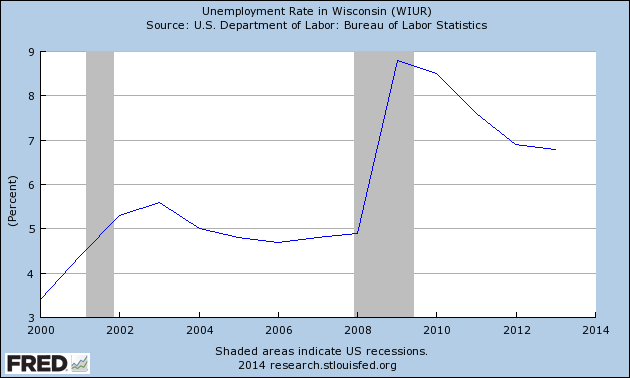 Kleefisch talks of turning a deficit into a surplus. "We also took necessary steps to get our fiscal house in order over the past few years. We inherited a $3.6 billion budget deficit when we took office and turned it into a $759 million surplus by the end of the 2011-'13 budget."

As Media Matters commented, "Fox News hyped Wisconsin Governor Scott Walker's economic record, claiming that the governor's economic plan generated a nearly $1 billion budget surplus while ignoring that the current surplus is built upon a projected structural deficit and that the state ranks 28th in the nation for job creation under Walker's tenure." From the same article, "The Legislative Fiscal Bureau: Under Walker's Budget, Wisconsin's Structural Deficit Would Grow To $725 Million. A non-partisan analysis of Walker's most recent budget concluded that the Governor's proposed tax cuts would increase the state's budget shortfall over the coming years. Walker's tax plan hyped by Fox would in fact cost the state $180 million and would ultimately turn the touted surplus into a deficit by 2017."

The Democratic Party of Wisconsin also notes, "When Scott Walker was running for governor, he promised to balance budgets Generally Accepted Accounting Principles (GAAP); however, the budget he claims as balanced is anything but when using GAAP. By gutting public education to the tune of $2.6 billion and slashing more than $500 million from public healthcare, along with skillfully kicking the can down the road with accounting tricks that pass debt onto future budgets, Walker has given the appearance of a balanced budget. But when using the GAAP that Walker promised to use, Wisconsin’s deficit will actually be more than $3 billion at the end of the biennium – a larger deficit than Walker inherited."

Kleefisch continues, "And some 100,000 jobs and nearly 13,000 new businesses have been created since we took office." Again, as we can see from the graph below, all this "job creation" has only gotten us back to 2004 levels. Oddly, I remember some politician promising 250,000 new jobs in his first term. 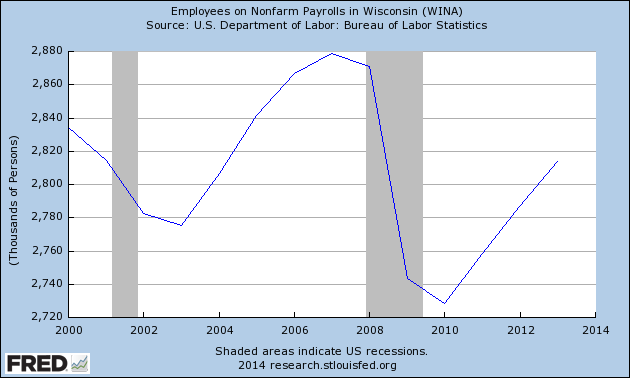 Republicans always talk about "putting money back into taxpayers pockets." Although Kleefisch didn't mention it in her op-ed, lets take a look at the real median household income in Wisconsin. Are those wonderful Walker policies fattening your wallet? As the graph below shows, the median household actually has less now than they did during the peak of the recession. 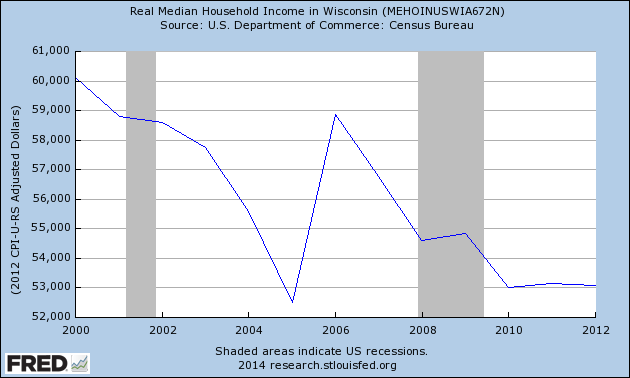 Kleefisch and Walker are giving Wisconsin taxpayers a bigger debt burden, meaningless promises and a false reality.
Posted by Ryan at Friday, January 31, 2014 No comments:

One From The Vault

For Further Reading:
The Relationship Between Union Membership & State Budget Deficits
Right To Work For Less
Posted by Ryan at Sunday, January 26, 2014 No comments:

Oxfam Finds 85 Elites As Rich As 3.5 Billion People
Trickle-Down Economics Is The Greatest Broken Promise Of Our Lifetime
Here's Why The Idea Of A 'Traditional Marriage' Is Total Bullshit
25 Manners Everyone Needs
Health Care Spending Slows To Historically Low Rate
Income Growth Has Stalled For Most Americans
The Biggest Myths In Economics
No, Raising The Minimum Wage Won't Kill The Economy
8 Subconscious Mistakes Your Brain Makes Everyday
Posted by Ryan at Saturday, January 25, 2014 No comments:

"People shouldn't be misled to think there's much in it for the bottom two-fifths of Wisconsin," Peacock said of Walker's latest plan.

Reschovsky said the proposed property tax cut would be of some help overall to renters, since it would help to hold down rent increases. But it would also help state companies with Wisconsin parcels and well-to-do families with vacation homes, not just elderly homeowners struggling to pay their annual tax bills.

We’re primarily concerned that Governor Walker’s plan ignores holes in the current budget, and creates a deeper hole in the next one – boosting the structural deficit in 2013-15 to $825 million.

That said, many people have asked us about the distribution of the proposed tax cuts, and we asked the Institute for Taxation and Economic Policy (ITEP) to crunch the numbers for us. The ITEP analysis — which focused just on the two major changes in the Governor’s plan — found that the top 5% of Wisconsinites, who made $161,000 or more in 2013, will get 18% of the tax cuts. By contrast, the bottom 40% get just 15% of the benefit.

Why Not Pay Everyone In Cocaine & Unicorns?

Research Shows Minimum Wage Increases Do Not Cause Job Loss

Minimum Wage
Why Does the Minimum Wage Have No Discernible Effect on Employment?
Posted by Ryan at Tuesday, January 14, 2014 No comments:


Wisconsin state Sen. Glenn Grothman (R) is attempting to roll back one of the state's progressive labor laws, arguing that workers should be allowed to work without a day off if they so choose.

Half Of All Jobs Created In The Past 3 Years Were Low-Paying: Study
The Economy is "Recovering" By Creating More Low-Wage Jobs... Increasingly Filled By Graduates 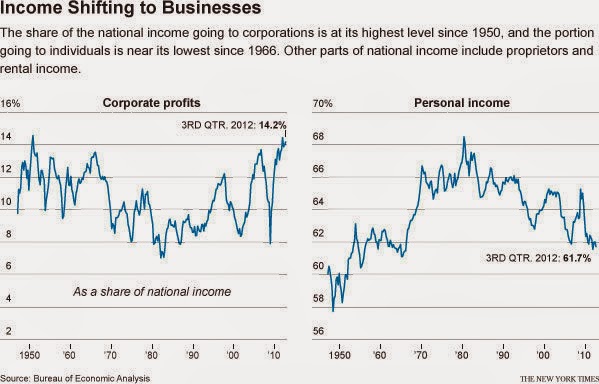 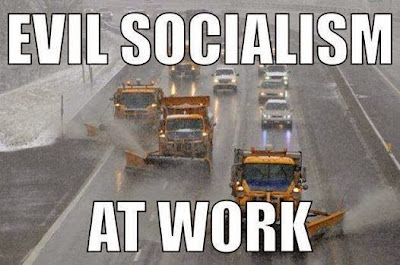