Just in time for Scott Walker's presidential campaign kick-off, his economic revisionists are spinning yarns about steady improvement and a bright future due to Walker's policies.

Tom Hefty (conservative shill, Wisconsin Policy Research Institute affiliate and Journal Sentinel contributor) started this wishing-and-hoping form of policy analysis back in March. As I described his actions then, "He just rattles off numerous surveys that say Wisconsin is headed in the right direction, Wisconsin is poised for job growth and Wisconsin has a bright job outlook. More or less, opinions masquerading as statistics."

First he claims it's really too early to tell if Walker's economic policies are working. Funny, when the data aren't on their side, conservatives are suddenly patient in their proclamations. Yet, the entire time Scott Walker has been governor has coincided with his cronies unrelenting boosterism, despite the fact that reality (the data) disproves their optimism.

Then, like Hefty, Bauer talks of many good business climate rankings and surveys showing good potential for Wisconsin. For conservatives, simply becoming a right-to-work state will somehow transform the economy. Too bad all the research looking at right-to-work has found no such definitive benefit. And, surveying conservatives about whether the policies they favor will be good for the economy is like asking a cocaine addict if he would like more cocaine. Despite the evidence of the damage being done, they still want more, more, more.

Next, though, he details all of the actual economic metrics where Wisconsin trails Minnesota. You know, reality. Those unimportant things like per capita income, unemployment rate, and education levels. Take that, Minnesota! 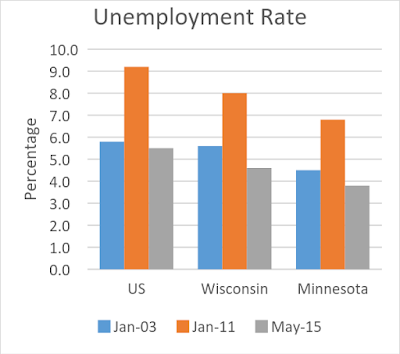 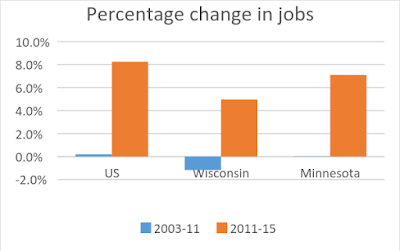 This is followed by a host of historical excuses/reasons why/how this has hamstrung Wisconsin. Surprise! Cities and states have histories and experiences that have shaped their progression. Poor Milwaukee is caught between Chicago and Minneapolis. Yet, having these two economically vibrant centers nearby has been good for Milwaukee, not bad. And we would have an even more regional economy, drawing more from both of those cities and strengthening the region as a whole, if we had improved rail transit amongst the three cities. A terrible Walker policy (killing the train) that will have implications in the region for decades.

Bauer then abruptly switches gears claiming Wisconsin is more business-friendly and therefore Wisconsin has a brighter future. "A better Wisconsin business climate will lead to a better Wisconsin economy. The opposite is true for Minnesota."

Doesn't the fact that Minnesota's economy has been performing better than Wisconsin's for the past few decades tell us that they have a pretty good business climate and a productive set of economic policies in place? Wisconsin has improved in the business climate ranking - we're now 32nd. Minnesota's ranking is 9th. 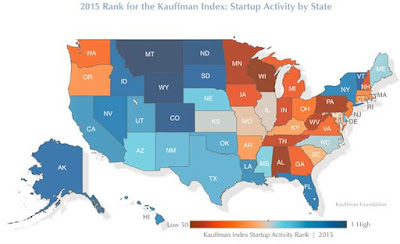 Wisconsin is hardly even nipping at Minnesota's heels, even using the supposed indicators that the boosters claim show such promise for Wisconsin.

As was noted back in April, "Even the former mayor of Minneapolis, writing in the Minneapolis Star Tribune, felt the need to highlight the differences between Minnesota and Wisconsin policy-choices since Scott Walker took office:"


In Minnesota, Dayton turned a $5 billion budget deficit into a more than $1 billion budget surplus in just one term. By raising taxes on the wealthiest earners, Minnesota is now in a position to invest more resources into the state’s schools and infrastructure.

In Wisconsin, Walker was unable to take his state out of the red and is still facing a $2 billion budget deficit. Walker made the decision to cut taxes for millionaires and billionaires, while slashing programs and refusing investments at the expense of middle-class families and Wisconsin’s financial well-being.

In Minnesota, Dayton has moved forward Democratic policies like increasing the minimum wage, expanding Medicaid and investing in the middle class, and now we are seeing one of the most business-friendly states in the country. Just this year, Forbes ranked Minnesota as the ninth best state for business, seventh in economic climate and second in quality of life.

In Wisconsin, Walker opposed a minimum-wage increase and equal-pay legislation, rejected federal funds to expand Medicaid, and attacked Wisconsin workers with right-to-work and anti-collective-​bargaining policies. As a result, the cost of doing business in Wisconsin is higher than the national average, and median household income is thousands less than in Minnesota.

The facts are clear: Walker and the Republican trickle-down economic policies have made it practically impossible for Wisconsin to recover from the recession, and the state consistently sits at the bottom of the region in private-sector job growth.

Bruce Thompson's article, at Urban Milwaukee, asks, Why is Minnesota outperforming Wisconsin? He ultimately concludes Minnesota is doing many things correctly and, "Empirical evidence can lead to better solutions—but not if it is treated only as grist for a pre-determined position." Minnesota is following the evidence, Wisconsin republicans are merely digging in their heels continuing to push policies they know are unfair and inefficient.

For Further Reading:
Scott Walker & Wisconsin's Slow Job Growth
38th, For Republicans, Is The Head Of The Class

These are just a few more of my thoughts regarding the Milwaukee basketball arena boondoggle playing out.

Part of the arena plan is for the county to contribute $4 million per year for 20 years. As Dan Bice explains in a separate article, "The county would 'certify' its uncollected debt, allowing the state to hit up Milwaukee County residents for at least $80 million over the next 20 years. The state would cut its aid to the county if it failed to gather up at least $4 million in any year under the proposal."

As the Milwaukee County comptroller, Scott Manske, reported, "While the county is able to make a $4 million annual payment out of existing cash flows from receivables, it is unlikely the county will be able to generate an additional $80 million over 20 years for payments on the arena debt based on the changes to the collection of its receivables."

The Biz Times article does give space to Patricia Jursik's view that this funding mechanism for the county is a "trick" and "a con game." Jursik stated, "The county executive's deal is unconscionable since this bad debt collection will fall mostly on the poor, the elderly, those suffering medical setback or loss of a job. Does the Buck's organization really want to be associated with such a deal?"

Sadly, this is followed by quotes from the usual cast of characters bloviating the usual arena platitudes. The arena will improve quality of life and it will create temporary and permanent jobs.

If work associated with development creates jobs and grows the property tax base, what is the excuse for not spending more on other development projects - roads, bridges, trains, greening public buildings, etc.? If public spending has such good a return on investment, why do the proponents only support such spending when the primary recipients are privately-owned developments?

The article continues, "Arena supporters also say the county should sell 9.8 acres of land in the Park East corridor to the Bucks ownership group for $1 to assist the plans for $400 million in ancillary development around the arena." The article then gives Tammy Maddente, VP at First Weber Group, space to opine how $1 for the land would be a great deal.

Should the state, county and city now have to pay for the sites of private developments. If this arena proposal is such a great deal for everyone involved, shouldn't the Bucks have to at least pay the market rate for the land. Should the public just give away its assets to private developers?

It's amazing how many professional stadiums have been built in Wisconsin, yet it seems we've learned nothing and logic is absent from the discussion.

As I've said many times, if these arena developments were such no-brainers, economic catalysts, why aren't market forces lined up to grab a piece of this low-risk, high-reward income stream? If, comparatively speaking, this arena-investment has such a great return, greater than alternative investments, why is the public footing most of the costs and taking on most of the risk? Why, suddenly, when it comes to building sporting arenas, is the market so bad at allocating resources?

Of course the answer is because these are bad investments. They money spent is basically corporate welfare and the supposed benefits are always exponentially exaggerated. And, don't forget, the costs are always much more than initial estimates.

To borrow a descriptor from Antonin Scalia, this arena-funding scheme for the county, along with the assumed and inflated ancillary outcomes, is complete jiggery-pokery.
Posted by Ryan at Sunday, July 05, 2015 No comments:

In one of their final votes on the state budget Thursday, GOP lawmakers approved sweeping limits on public access to records that would shed light on future actions of legislators, Gov. Scott Walker's administration, state agencies and local governments.

The proposals were tucked into an expansive measure that passed the Joint Finance Committee 12-4, with all Republicans in favor and all Democrats against. Hours later, with another party-line vote, the committee early Fridaysent the overall budget to the Senate and Assembly.

The GOP plan would limit public records requests for lawmakers' communications with their staff and for drafting records of legislation after it's been introduced. It would also exempt a host of records created by the Walker administration, state agencies and local governments and put new limits on public access to information about dismissed criminal charges in some instances.

The measure would also give lawmakers a broad legal privilege that would allow them to refrain from releasing records when they are sued and bar their current and former staff from disclosing information legislators wanted kept private.

More self-serving policy from Walker and his cronies. Way to cover your tracks, criminals.

For Further Reading:
To Celebarate the Fourth, Scott Walker's GOP Declares Secrecy
Posted by Ryan at Friday, July 03, 2015 No comments:

Greece Over The Brink
A Primer On The Greek Crisis
Some Stuff You Should Know About Greece Before You Lose Your Shit
12 Charts & Maps That Explain The Greek Crisis
The Forgotten Origins Of The Greek Crisis Will Make You Think Twice About Who's To Blame
A Very Short History Of The Crisis
Argentina Shows There May Be Life After Default
Bernie Sanders Blasts Greece's Creditors
Grisis
What Makes The IMF Think It's Right About Greece?
The Greek Crisis, Austerity And A Post-Capitalist Future
When Greece Forgave Germany's Debt
9 Myths About The Greek Crisis
Posted by Ryan at Friday, July 03, 2015 No comments: