As I surmised back in June, one of "The Backdrop Boys," Tony Zielinski is planning on challenging Tom Barrett for mayor.

Streetcars, Safety and Hucksters
Safety, Guns and Opportunists
Streetcar or Safety
Posted by Ryan at Thursday, November 30, 2017 No comments: 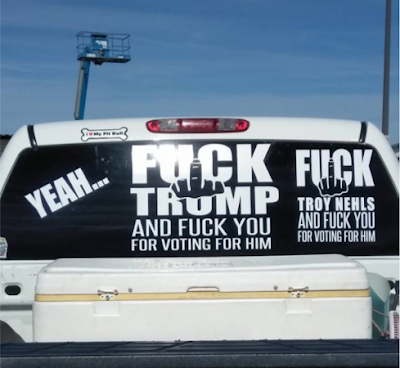 If you are one of those gung-ho, 'back the badge' crusaders; one who believes there is never enough police and the costs for those police are always justified, then you need to pay more in taxes. The police take up the majority of nearly every municipal budget, and their burden on budgets continually grows.

So how about if you have a 'back the badge' sign in your yard, or when you obtain your 'back the badge' sign, you're automatically signed up for an additional 10% tax on your yearly earnings to help pay for the exorbitant costs of the police? Otherwise, how about supporting a mayor when he tries to reign in the ever-increasing demands and costs from police departments?


They promise to serve and protect, and in return, Milwaukee police officers are rewarded with full pensions after 25 years on the job. For some, that means retirement as early as age 42. Milwaukee's mayor said the costs are cutting into public safety.

"Unfortunately, it's going not to police officers on the street. It's going to pay for their pension," Milwaukee Mayor Tom Barrett said in October.

So how expensive are these police pensions? WISN 12 News did the math.

But there's more than one.

The average retirement age at Milwaukee Police Department is 53, but there are 834 officers between 42 and 52 currently collecting pensions. The cost to taxpayers for a single year is nearly $48 million. [source]

Another Budget Trick From Lyin Ryan And Company
What Red States Are Passing Up As Blue States Get Billions
More Guns Do Not Stop More Crimes...Why Do So Many Americans Believe The Opposite?
The Theory Behind Trump's Tax Cuts Is Exactly What Gave Us The Failed Bush Economy
Gov. Walker Endorses The Federal Tax Scam That Favors The Rich
Making America More Like Scandinavia
Who Wants To Market The Streetcar?
Don't Be Fooled By GOP Tax Reform Promises
Milwaukee's Riverwalk Earns Prestigious International Award
What More Evidence Of Collusion Do You Need?
Slippery Scott Is At It Again
GOP Bill Cuts Taxes For Private Jet Owners, Hikes Taxes On Students
Posted by Ryan at Friday, November 24, 2017 No comments:

The Wisconsin Idea: The Possibilities Of Cooperation

The push and pull forces of development seem to be at odds across the State of Wisconsin. Rarely does it seem that cooperation or a more regional perspective takes precedence in molding economic development around the state. The Governor has his take, mayors have theirs and different private players in the different cities have theirs.

Transportation (and its routes) takes a certain shape in one locality, while a completely different strategy prevails elsewhere; with no cooperation between the two in the final product, even though agglomeration economies are there to be had.

Energy and environmental policy shares this same blinder. Rather than working together to decrease energy costs, to upgrade systems, to protect the environment, parochial self-interest prevails and we all end up less efficient and less attractive for businesses or residents.

Public policy (heavily influenced by private interests) seems to be encouraging a "me first" attitude. Which is fine for many decisions. But when transportation, the environment, education, and health care issues (which impact every citizen) are being planned, a broader metropolitan, statewide or regional perspective is imperative.

We need to retreat from the quick, flashy impulsive economic development paradigm that currently operates across the state.

The WEDC has been unaccountable and unable to track job growth or even keep good records on how much they are giving away and to whom.

Walker and Wisconsin Republicans have whole-heartedly embraced crony-capitalism. They are more than happy to mortgage the future of Wisconsin residents and the environment for flashy press releases, news conferences, and campaign contribution promises.

Giveaways to Amazon in Kenosha and the looming Foxconn welfare are the most recent examples of Scott Walker's corporate welfare bonanza. And, Amazon has their hand out again hoping to bribe their way to a few more bucks at the Wisconsin taxpayers' expense. As Henry Grabar wrote, "North American cities have debased themselves in the Amazon HQ2 reality show. The worst is yet to come."


The Foxconn project comes at a high cost with uncertain economic benefits, but clear political payoffs. The political economy of Foxconn suggests who the winners will be: the governor of the state, for whom the proposal is the cornerstone of an effort to redeem himself on a pledge of job creation; the Speaker of the House of Representatives, who can claim credit for a multi-billion infusion of investment in his district; and owners of land for the greenfield site, who will be paid sums well above the going price for farmland. For most of the rest of the state’s 2.8 million employed residents, the Foxconn deal likely misses the target. Near-term, it guarantees all residents will pay millions of net costs in higher taxes or reduced services. Promised for the longer term are jobs most likely concentrated in one of the most prosperous regions of the state and mostly inaccessible to those in the greatest need of an effective—and equitable—strategy for economic development.

Bruce Thompson concluded, "Bribing companies to relocate here doesn't work...Wisconsin’s attempts to lure companies—particularly manufactures—through subsidies have been largely ineffective and threaten to become increasingly expensive, by promoting an arms race among states...It is past time for our state’s leaders, particularly those charged with development in Wisconsin, to take advantage of increasing research data on what works and what does not."

In an odd (dis)incentive toward good environmental policy, Scott Walker is proposing a fee for Wisconsin electric and/or hybrid vehicles. A policy which would end up discouraging behavior that would be environmentally and economically positive. We would all (logically) prefer less dependence on oil, less pollution and the encouragement of green policies.


Walker's comments put him in the camp of Republicans who have argued owners of electric and hybrid vehicles should pay higher fees because they don't contribute as much toward maintaining roads. The state's 32.9-cents-per-gallon gas tax is its main source of funding, but electric vehicles don't use gas and hybrid vehicles use far less of it than standard vehicles.

It's all about the road-building cabal and the Republican's never-ending boosterism for such. The persistent march of sprawl ... wasteful, inefficient and unhealthy. Walker and Wisconsin Republicans would rather discourage clean energy (which results in cleaner air and water) and connective mass transit options; they prefer roads, interchanges and off-ramps.

Yet this continual spreading of concrete is also waterproofing the land from absorbing rain water...which is resulting in more destructive flooding.

Here, again, in numerous (environment, energy, development, transportation) instances we see the Republican position is in direct opposition to the best interests of the citizens. In fact, their position is wasteful, inefficient and harmful.

Milwaukee has been on a roll. New development and redevelopment has been at a brisk pace for the past few years.

Often, surrounding such development, there are questions about funding, winners and losers, and equity in the location of these investments.

Recently there has even been talk of allowing a dedicated sales tax to fund certain programs.

Minneapolis/St. Paul and Indianapolis have been the economic stars of the Midwest over the past few decades. One of the key tools used in their ascension was the implementation of regional tax sharing. Rather than one suburb competing against another, or the city competing with a suburb, they pool tax dollars to enable an equitable growth to benefit the entire metropolitan area, rather than pitting one area against another.

As Whet Moser put it, "Building connections, both transit and political, between its municipalities while sharing the financial burden."

After speaking with Tom Weaver of the Minneapolis Metropolitan Council, Ed Brock reported :

Seven counties in the Minneapolis metropolitan area have had a tax-sharing agreement since 1971, says Tom Weaver, regional administrator for the Metropolitan Council. The point of the programs is to discourage competition for the tax base created by shared infrastructure. "All this public infrastructure is paid for by all of us, so you shouldn't have one particular community where this infrastructure just happens to be located that gets all the tax benefits from that infrastructure," Weaver says.

As the Institute for Local Self-Reliance wrote:


The drive for increased property tax revenue, and in some cases sales tax revenue, can lead local governments to make land use decisions that conflict with other planning and economic development goals. A community might reject much needed affordable housing in favor of expensive homes, for example, or forgo office buildings with high-paying jobs in favor of big box retail stores with low-wage jobs, in anticipation of generating more tax revenue with a comparatively smaller burden on public services.

The quest for revenue-generating development creates competition among neighboring jurisdictions, which may engage in bidding wars to offer developers the biggest tax breaks or least stringent environmental regulations. From a regional perspective, providing subsidies for businesses that have already decided to locate in the area is unnecessary and even destructive. A big box store, for example, will cannibalize sales from existing local businesses and shopping centers and, for the region as a whole, there will be no net gain in economic activity.

In metro areas, the “fiscalization of land use” or “cash box zoning,” as this problem is known, fosters sprawl and polarization. Some jurisdictions are winners; others are losers. New suburbs on the urban fringe with extensive new commercial development and relatively affluent homes will have high quality public services with a relatively low tax rate. The central city and older suburbs, with declining commercial centers and lower-income families, will be forced to impose higher tax rates and deliver poorer quality services. This disparity tends to snowball and engender a cycle of sprawl as more middle-income families flee to the suburban fringe.

Regional tax-base sharing offers one way to alleviate this problem. Under tax-base sharing, all of the municipalities within a metropolitan area agree to share tax proceeds from new development. This eliminates inter-regional competition; facilitates other planning goals such as preserving open space or maintaining a vibrant downtown; encourages suburbs and central cities to cooperate on regional economic development goals; and leads to a more equitable distribution of tax burdens and public services.

Here again, the state seems to be unduly burdening the primary wealth generator of the state whilst also handicapping Milwaukee's ability to raise revenues. Sadly, Milwaukee and its surrounding neighbors have never had a meaningful conversation about regional taxation and our shared interests. This is the outside-the-box thinking we need from our public policies to make the state a more attractive place for living and for investment.

Until, as a state, we can get past our prejudices about what we think about the big city, a small town, a rural area, etc., we won't be able to thoughtfully and adequately address the issues that impact everyone in the state.

Clean air, clean water, efficient transportation options, clean energy and other smart public investments benefit all citizens. If this state has any practical and forward-thinking leaders, we should be able to move forward to address some of these policies and implement meaningful action plans to not only benefit the citizens of Wisconsin, but to also make Wisconsin a more attractive place for business and tourists.

The current "me first" blackmail and bribery school of development isn't working.

Bill O'Reilly Is A Goon