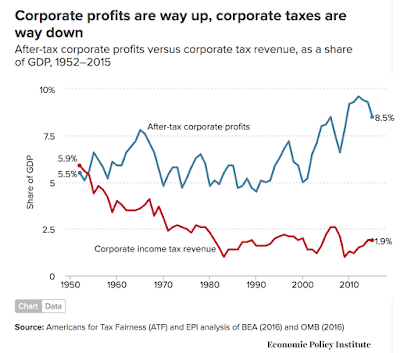 The chart above, again, is a startling reminder of why the federal government (along with states and cities) keeps saying they don't have enough money to fund public programs.

Follow the money and tax those who have it!

We've gone from a country that built the best products, roads, trains, infrastructure, and had pride in having the best education and health care.

A country where the well-to-do and the wealthy felt an obligation to give back, to help build this country and to invest in the future of infrastructure and citizens.

Now we're defunding these initiatives while simultaneously cutting taxes on the richest individuals and corporations, building sports stadiums for billionaire owners, and being blackmailed by billionaire companies to fund part of their operations under the guise of job creation.

Taxes are being pushed, more and more, onto the income of workers, and less and less on - corporations, investments and capital gains - the income of the wealthy.

Inequality is greater than ever before. The richest .01% are modern-day kings and queens. We allowed an oligarchy to purchase our democracy and subvert the will of the people.

We've heard this trickle-down story for decades. Let the rich have more of the pie and somehow, someday it will work its way back to the rest of us and a better life for us.

But that hasn't happened and it's not going to happen. The more the richest of the rich have, the more they want to have. And that's exactly what they've done.

The United States has more than enough money to support parks, clean
air and water, the arts, and to provide world-class education, transportation and health care options, to name a few.

Taxes are the price of a civilized society. To continually erode the tax base, is to continually undermine the foundation and fabric of the American experiment.

It's time to tell the "winners" they need to give back to the country that's given them so much.

Read my lips: more taxes on the rich!

For Further Reading:
Corporate profits are way up, corporate taxes are way down

Who Pays
A Guide to Statistics on Historical Trends in Income Inequality
Posted by Ryan at Sunday, September 24, 2017 No comments:

Monopoly Rents And Corporate Taxation
Basically Every Problem In The US Economy Is Because Companies Have Too Much Power
The Hit Job On Chief Flynn
UW's Noah Williams Isn't Just A RW Hack. He's A Koch Addict
Harvey Shows Anti-Government Crowd's Utter Hypocrisy
Tax On Hybrids And Electric Vehicles Is Poor Economic Policy
David Brooks Gets Story On Wage Growth And Productivity Completely Wrong
How Local Housing Regulations Smother The US Economy
The Voting Commission Is A Fraud Itself
Why American Workers Pay Twice As Much In Taxes As Wealthy Investors
Houston's Flooding Shows What Happens When You Ignore Science And Let Developers Run Rampant
Why America Still Hasn't Learned The Lessons Of Katrina
Exempting Suburbia
Have Smartphones Destroyed A Generation?
Posted by Ryan at Sunday, September 17, 2017 No comments:

Suburban America Is On A Steady Decline