The Tax-The-Rich Movement Keeps Growing
The Hypocrisy Of Trump's Job Claims
California High-Speed Rail And The American Infrastructure Tragedy, Explained
The Global Con Hidden In Trump's Tax Reform Law, Revealed
Lots Of Presidential Candidates Talk A Good Talk. Look At Their Records Instead.
Bill And Melinda Gates And The Problem Of The "Good Billionaire"
How Republicans Bought Their Own Tax Cut Snake Oil
Trump's War On California
The CIA's Masterful Use Of Fake News
Posted by Ryan at Saturday, February 23, 2019 No comments: 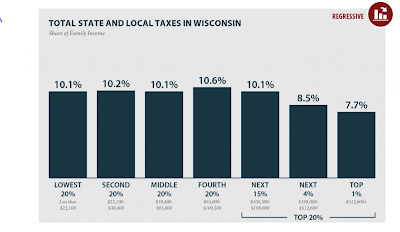 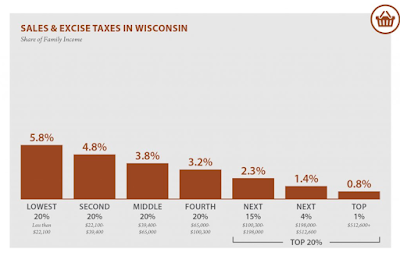 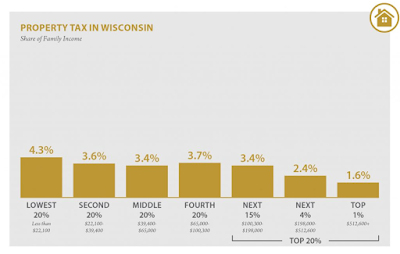 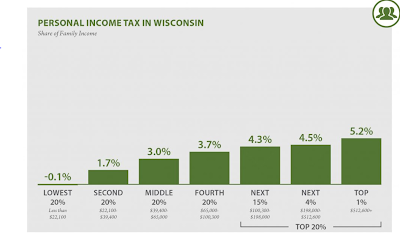 Donald Trump & The Republican Party: The True Enemy Of The People

The Backers Of New York's Giveaway To Amazon Still Don't Understand Why It Was Wrong
End The Subsidy Wars: Amazon Took Advantage Of A System That's Baked Into America's Economy. We Must Finally Fix It.
Amazon's Pullout From New York Shows That It Misplayed A Bad, And Expensive, Hand
New York Did Us All A Favor By Standing Up To Amazon
Amazon HQ2 Was An 'Unfortunate Distraction' From 'Needy Communities'
Amazon's Decision To Pull Out Of NYC Is A Massive Blow To Corporate Welfare
Amazon And The End Of The Growth Machine
Amazon Got Exactly What It Deserved - And So Did New York
How Amazon's Booming NYC Neighborhood Got Tax Perks Meant For The Poor
Posted by Ryan at Saturday, February 23, 2019 No comments:

A Few Words On Socialism

So·cial·ism /ˈsōSHəˌlizəm/ (noun)
A political and economic theory of social organization which advocates that the means of production, distribution, and exchange should be owned or regulated by the community as a whole.

Republicans and conservatives, and even some moderates and Democrats, have been demonizing the idea of socialism in the media as of late. (All while bitching about billionaires not being given billions in corporate welfare - socialism for the rich.)

Some of the Democratic 2020 presidential candidates have been talking of taxing the rich, fighting climate change, getting off of fossil fuels, providing Medicare for all and providing free college tuition.

The status quo, pro-business, free marketeers are up in arms over this.

Earth to douchebags - America is already a socialist country.  And conservatives are more than happy with socialism for the rich.  This is the predominant socialism (for the rich) in the U.S., hence rising income inequality over the past few decades.

But let's take a look at some examples of all the "socialist" policies America has:

The crux of the recent call for higher taxes and re-investment in our public goods is not some wacko commie scheme, it's the same plan of action the United States took after World War II, with high marginal tax rates, which led to our greatest period of growth and prosperity.  A rising tide lifted all boats. Our infrastructure was world class. People who worked were able to pay their bills and save for retirement. 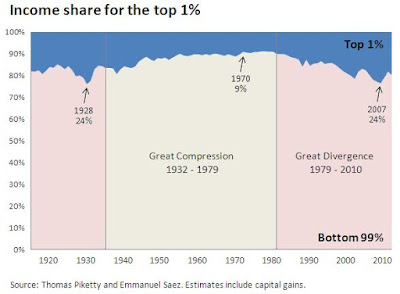 Republicans always reminisce about the great days of yesteryear.  But they forget to mention the fact that taxes on the rich were much, much higher then, too.

For Further Reading:
Democratic Socialism? We're Already Living In It
5 Ways America Is Already Socialist
The Great Wealth Transfer
The Great Divergence
Wealth, Wages and Politics
Politics, Policy and Inequality
Graph: The Great Divergence
The United States Of Inequality
Disclosing The Costs Of Corporate Welfare
Where Is The Outrage Over Corporate Welfare
Taxpayers — not Big Pharma — have funded the research behind every new drug since 2010

Did Deregulation Work?
Posted by Ryan at Wednesday, February 20, 2019 No comments:

‘Morning Joe’ Rips Alexandria Ocasio-Cortez Over Amazon Pull-Out: ‘She Only Cares About Herself’


The set of “Morning Joe” was not happy about the decision by Amazon to pull out of their new planned headquarters in New York City yesterday, laying the blame for the decision at the feet of Rep. Alexandria Ocasio-Cortez and fellow recalcitrant progressive lawmakers.

On set there was near unanimity that Ocasio-Cortez did not understand the broader situation and was unfamiliar with basic economics.

“The protests that we saw were to get on AOC’s bandwagon. And what’s shocking to me is yet once again she shows how little she understands, about not just economics, but even unemployment,” show mainstay Susan Del Percio said. “Just because she has a progressive agenda, which some people like, does not mean she has the city’s best interests. What she showed me today, or yesterday, is that she only cares about herself.”

How much was New York giving Amazon?  What was the cost-per-job?  If you're not going to discuss the details of the giveaway and actually analyze it in comparison to other possible investments, maybe you're the one who needs to shut the fuck up.

I guess, according to the Morning Joe crew, giving billions to a billionaire is good use of public dollars.  Oh, but all these rich pricks hate socialism.  Yeah, unless it's for them.

For Further Reading:
Amazon To Pay $0 In Federal Taxes In 2019
Economic Development, Tax Incentives and The Plutocracy It's Creating
Posted by Ryan at Friday, February 15, 2019 No comments: 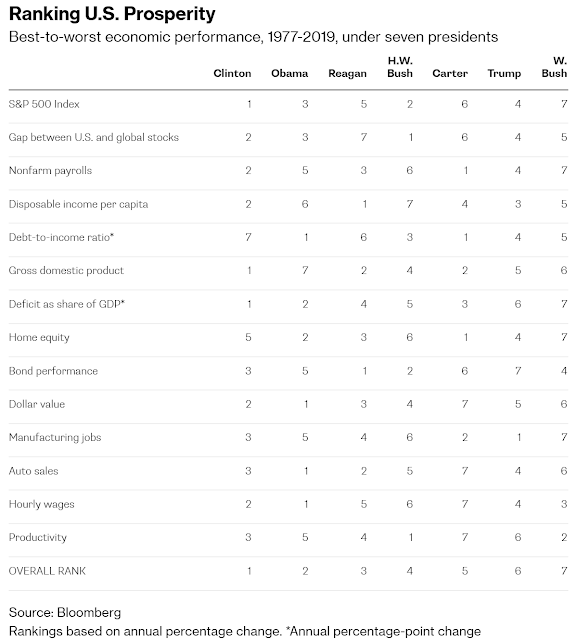 Matt Kuchar, You're A Cheap Fuck


Kuchar won the Mayakoba Golf Classic and the $1.296 million prize that came with it in November. He paid Ortiz, aka El Tucan, $5,000 for his work that week.

Kuchar eventually offered Ortiz an additional $15,000, according to the report.

Ortiz declined the offer. He was seeking $50,000, which is the value he placed on his work that week, according to the report...
Verbal agreements between players and Tour caddies come with the understanding that a caddie is due 5 percent of a player’s winnings, a number that can increase to 10 percent in the event of a win.

Ten percent of Kuchar’s victory at Mayakoba would be approximately $130,000...

“So I certainly don’t lose sleep over this. This is something that I’m quite happy with, and I was really happy for him to have a great week and make a good sum of money. Making $5,000 is a great week.”

According to Golf.com, Kuchar is 10th on the PGA career earnings list with more than $46 million.

So maybe Matt Kuchar isn't losing any sleep over this, but a $44,000 difference in payment is a lot of money for most people.  With Kuchar's $46 million in career earnings, and the fact that this caddie just helped him add another $1.3 million, he should have done the right thing and at least paid the caddie the typical minimum 5%.  Kuchar would have still had $1,231,200 for himself.

It's no wonder most people view golfers as elitist and out of touch.  Matt Kuchar is another prime example.
Posted by Ryan at Friday, February 15, 2019 No comments:

Rules Of The Road

Clean the snow off your car.  I'm sick of you morons driving around with snow on your windows, the vehicle's roof, over the tail lights and then having the snow and ice blow off your car onto other cars driving anywhere near yours.  Take five minutes and brush the vehicle off before you drive on the road, you inconsiderate maniac.

Those of you living in dwellings with an alley, shovel out your space in the alley (and shovel out your sidewalks in the front of the home in a timely manner).  People shouldn't be trapped in their garage because some lazy ass has decided they don't need to shovel their portion of the alley.  Especially those of you owning properties at the entrances of the alley.  It's your responsibility to clear that entrance.  If that's too much for you, sell the house so a responsible owner can move in.

When there is an obstruction in your driving lane (a snow mound, a vehicle, etc.) don't just swerve into my oncoming lane assuming I'll move over.  First, the obstruction is in your lane, you're the one that needs to wait for oncoming traffic to pass before you swerve into the other lane.  Stop being a dick.

This is all really just common sense, courtesy and manners.  Enough of this thoughtless, selfish behavior.


Bill Gates says he’s fine with the idea of higher taxes for the rich, but plans like the one being championed by Alexandria Ocasio-Cortez, which target the top income brackets, are too extreme—and could encourage the wealthy to hide their money in offshore accounts.

“I believe U.S. tax rates can be more progressive. Now, you finally have some politicians who are so extreme that I’d say, ‘No, that’s even beyond,'” Gates said. “You do start to create tax dodging and disincentives, and an incentive to have the income show up in other countries and things. But we can be more progressive without really threatening income generation—what you have left to decide how to spread around.”

First of all, the wealthy already hide their money offshore and dodge taxes.

High tax rates, such as those proposed by Alexandria Ocasio-Cortez, led to a single breadwinner being able to provide for a family - a car, a home, a college education, etc.

Ever since the Reagan revolution, of tax cuts and deregulation, households with multiple workers can barely get by.  Tax rates aren't a disincentive to create wealth.  They are a mechanism to correct the greedy urges of those whom control the means of production.

Since we can't count on the Walmarts, Amazons, Kochs and all the other greedy oligarchs to do what's right and pay their employees a living wage, to provide retirement and health care to their employees, and to pay a fair share of taxes to help the infrastructure that their businesses and we all depend on, we need to tax them.

Trickle down doesn't work.  It hasn't worked.  Taxes are the only way of giving workers back income that they helped to produce and/or putting it toward more public goods.
Posted by Ryan at Wednesday, February 13, 2019 No comments:

The Republican Party Is Broken

Alexandria Ocasio-Cortez's Tax Hike Idea Is Not About Soaking The Rich
Unions Did Great Things For The Working Class
Economists Get Serious About Harm From Monopolies
If Only Obama Had Done The Things Obama Actually Did
Antitrust And The Financial Sector
Cory Booker's Baby Bonds Nearly Close The Racial Wealth Gap For Young Adults
All Of The Extremist Killings In The US In 2018 Had Links To Right-Wing Extremism
How Elizabeth Warren's Wealth Tax Would Remake America
Alexandria Ocasio-Cortez, Crusher Of Sacred Cows
Progressive Labor Standards
What Do We Actually Know About The Economy?
Yes, Polarization Is Asymmetric - And Conservatives Are Worse
Should Billionaires Even Exist?
How Frigid Polar Vortex Blasts Are Connected To Global Warming
The Wealth Gap And Miller Park's Deal
Republicans Cynically Demonized Government For Decades. The Shutdown Belongs To Them.
Posted by Ryan at Saturday, February 09, 2019 No comments:

Scott Walker and Wisconsin Republicans are just terrible, stupid, selfish, greedy and soulless people. Their policies (along with all other Republican policies) continue to waste taxpayers' dollars. Who are these people voting for Republicans that take citizens' tax dollars and give it to rich plutocrats? Why do people continue to support such an obvious transfer of wealth from the majority of citizens to the richest?

The failure of Republicans policies has been persistent. What type of delusion or cognitive dissonance makes people continue to hope these Republican policy lies will finally help them? All of the empirical evidence from the last 50 years shows that the policies the Republicans are spouting hurt all but the richest Americans.

As most everyone looking into the boondoggle that is Foxconn concluded, the chances of this corporate welfare working were slim to none. And now, Foxconn is changing their plans. The promised LCD manufacturing plant is now morphing into a smaller R&D technology hub. Yet another great example of Republican governance - funneling public dollars to private paymasters with no accountability or concern for the outcome. As opposed to the typical Democratic governance, whereby public investment actually generates public benefits - think schools, roads, airports, trains, health care, etc.

For a more in-depth reading of all that was wrong with the Foxconn giveaway, see The Con That Is Foxconn or How Republicans Learned To Stop Worrying And Love Socialism For The Rich.
Posted by Ryan at Friday, February 01, 2019 No comments: