From 2006 to 2012, At Least Two-Thirds Of All Active Corporations Had No Federal Income Tax Liability

Despite all-time highs in stock and home prices, household net worth is down — except for the Top 10% 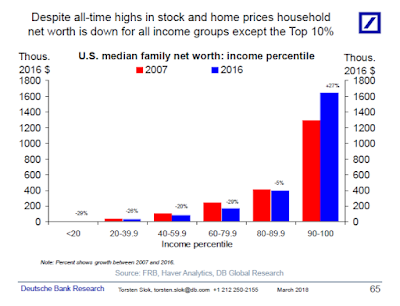 Won't You Be My Neighbor?

Legislators Pass Law to Benefit Landlords
Inflation? Bring It On. Workers Could Actually Benefit.
What Do We Know About Subsidized Employment Programs?
Six Teenagers Are Running For Governor In Kansas, And Suddenly This Doesn't Seem So Preposterous
Plight Of Phoenix: How Long Can The World's Least Sustainable City Survive?
Is Population Decline Bad?
Miller Park Tax Ends In 2020. Not.
How Vulture Capitalists Ate Toys 'R' Us
As Storms Get Stronger, Building Codes Are Getting Weaker
Wells Fargo CEO Is Getting A 36% Raise After The Bank's Nightmare Year
Kris Kobach Is A Loser
The Suburban Mystique
Posted by Ryan at Saturday, March 24, 2018 No comments:

Okay. Can we agree that it's time to rein in the Milwaukee Police Department?

Neither the County or the City needs another retirement scandal.

And, the "Backdrop Boy," Tony Zielinski, who voted for the County pension backdrop, has been involved in this latest scheme:

City Attorney Grant Langley said the only way to exceed the levy limits was through a vote of city residents in a referendum. But doing this, Langley wrote, could jeopardize how much money the state gives to Milwaukee each year.

Two days after the city issued its opinion, the Milwaukee police union endorsed Zielinski in his mayoral bid against Barrett in 2020.

But Zielinski said there was no connection between the endorsement and the letter, labeling the notion "preposterous." He said his support for Milwaukee cops is well known.

Reminded that he twice voted for the backdrop program as a county supervisor — a sore spot with the alderman — Zielinski said the staffer who created the Milwaukee County plan was convicted of misconduct in office. Also, he said, supervisors were misled by the county's pension actuary, which later paid the county $30 million to a settle a lawsuit.

Zielinski criticized the mayor and his people for trying to tar him by making an issue of the deferred retirement plan. He said Barrett should focus on his poor record on crime, not Zielinski's letter to the city attorney.

"I do my due diligence," Zielinski said.

Two things we now know for sure: 1) the City of Milwaukee needs to restructure and rein in the salaries, pensions and costs of the Milwaukee Police Department and 2) Tony Zielinski is, by all appearances, sleazy and corrupt, and the last person Milwaukee should elect mayor and allow to guide the City budget.
Posted by Ryan at Saturday, March 17, 2018 No comments:

CEO Pay Rewards What Was Going To Happen Anyway
Refusing To Play Dead For Big Banks, Warren Gives Fellow Senators 17 Chances To Put Consumers First
Scott Walker Does Not Respect Democracy
Stock Buybacks Are Soaring To Record Levels - And Cory Booker Wants To Stop It
Neoliberalism: How Seeing Markets As Perfect Turned Into An Ideology Justifying Crony Capitalism
Republicans Say They Favor Free Markets. Yeah, Right.
Across 20,000 Pages, The Pursuit Of Foxconn Unfolds
Wisconsin Supreme Court Candidate Screnock Says He Wouldn't Hear Cases About Legislative Maps
Foxconn Deal Gets Even Worse
Hundreds Of Canadian Doctors Demand Lower Salaries (Yes, Lower.)
Larry Summers Makes The Case For A Governmental Bailout Of The American Heartland
America Is Giving Away The $30 Billion Medical Marijuana Industry
Why Is California Rebuilding In Fire Country? Because You're Paying For It
Posted by Ryan at Sunday, March 11, 2018 No comments:

Pay To Play With The "Backdrop Boy"


The Bay View alderman chairs the city Licenses Committee, which holds sway over tavern, restaurant and other licenses in the city. It's a demanding but powerful post with great fundraising potential: In 2017, 34 of 154 people who donated to his campaign fund did so either before or after they sought approval from his committee in 2016 or 2017. Some of these folks appeared before the panel more than once, making for a total of 54 occasions in 2017 when past or future donors were on the agenda for license matters, the vast majority of which were approved.

A nice nugget from Milwaukee Magazine's article on Tony "Backdrop Boy" Zielinski. This insight shows the pay-to-play politician that Zielinski is. Another worthless public servant using the office to enrich himself and further his career [very similar to Scott Walker]. A reality far different than his scripted sound bites and oh-so-earnest press releases.
Posted by Ryan at Saturday, March 03, 2018 No comments:

According to the FBI’s uniform crime-reporting data for 2016, 90.1 percent of black victims of homicide were killed by other blacks, while 83.5 percent of whites were killed by other whites. While no life is inconsequential, the statistical evidence shows that—just as for blacks when it comes to black-on-black crime—whites are mostly victimized by other whites, with the vast majority of white murders committed by whites. This is because most victims of crime personally know their assailants. And while this is a truth across racial boundaries, no one ever talks about “white-on-white crime.”  Furthermore, the Bureau of Justice Statistics’ arrest data analysis tool shows that less than 1 percent of blacks overall (about 2 percent of black men) commit a violent crime in any given year. This means, factoring in interracial violent offenses, 99 percent of black men do not commit black-on-black crime. [source]

Tony, Do You Have Any Ideas And A Way To Pay For Them? Or Just Criticisms?

Mayor Barrett recently gave a speech addressing guns, affordable housing, lead laterals and other developments in the City of Milwaukee. And, of course, Alderman Tony "Backdrop Boy" Zielinksi had to give his usual negative comment. This has kind of become his thing. Any event, any policy, any news - there's Tony with a comment, pointing the finger and blame at anyone but himself, and never offering up anything other than platitudes.


Barrett also called for building or improving 10,000 housing units over the next 10 years, a plan the Journal Sentinel first reported Sunday.

The mayor also highlighted plans to expand Milwaukee's RiverWalk, touted a partnership with Associated Bank to increase funding for the city's STRONG Homes Loan program, and said he plans to use $2.5 million from the city's new water deal with the City of Waukesha to replace lead laterals in Milwaukee.

"While other communities are not addressing this problem, Milwaukee has been recognized as one of only 21 cities nationwide that has taken steps to address lead service lines," he said...

"I'm especially interested in seeing more affordable housing in the heart of the city," the mayor said. "Growing affordable units in these areas will make it easier for workers to get to nearby jobs."

The downtown development boom has allowed his administration to do more work in the neighborhoods, he said.

"I cannot believe the mayor expects us to believe the neighborhoods should take a backseat for 14 years," Zielinski said. "No wonder Milwaukee is one of the worst places to live in the country if you are African-American."

So, the Mayor wants to build or rebuild housing units, focusing on affordable housing, expand the RiverWalk and fix lead laterals. From this, the "Backdrop Boy" claims the Mayor is neglecting the City's neighborhoods. Huh? Also, what has the "Backdrop Boy" done for Milwaukee African-Americans?

But, just for a second, let's assume the "Backdrop Boy" has a point. First, what is Tony's solution? Second, where is Tony getting the money to fund his earth-shattering policy prescriptions? This is where Tony's pomp and circumstance falls apart. He has no plan. He has no answer to any of this. Primarily because he doesn't know what he's talking about.

It's easy to just poke the boss and criticize his decisions. But criticism can only be helpful when it's constructive. When a situation has been analyzed and one can offer an explanation for what went wrong and how those problems can be fixed, positive steps forward can be taken. But just trying to knock down someone else's ideas, without any substance or alternative action, is purely grandstanding. This is just Tony trying to draw attention to Tony so some in the City, outside of Bay View, might recognize his name in time for the mayoral election.

Tony has been standing on the street corner, pointing the finger at the Mayor, shouting, "You stink! That's no good! That was wrong!" But he hasn't offered a concrete solution to anything or any explanation of how he would pay for any idea he might have.

Typical "Backdrop Boy" move - exploiting the idea of neighborhood improvement for his own political advancement. Stay classy, Tony.
Posted by Ryan at Saturday, March 03, 2018 No comments:

Republicans No Longer Worried About Deficits, No Longer Believe In Free Market

Wisconsin Among Seven States That Competed For Foxconn

It’s one thing if we have advantages in an industry that we want to invest in or build upon; or we see, because of certain labor skill-sets, etc., we believe we can grow a specific sector quickly and we need it badly - such as when trying to get out of the Great Recession.


Sadly, none of these seem to be the case this time. And, even though this multi-billion dollar investment could end up creating jobs, spin-offs and ancillary businesses, it could still be a loser. At over $300,000 per job (best case scenario - 13,000 jobs), there is almost no way this is a smart investment. The opportunity cost is too high and the time-horizon too long.

And now we're taking money away from other developments and infrastructure projects, giving even more to Foxconn.