Free The Market, Screw The Poor

Recently the Pope opined The Culture of Prosperity Deadens Us. He critiqued income inequality, our worship of money and objects, and the general disregard we seem to have for each other.

I'm no religious scholar (actually an atheist), but I do recall the Christian tenets being about helping those less fortunate, sharing and caring, and general goodwill and concern for our fellow beings.

In fact, to directly quote Jesus, "It is easier for a camel to go through the eye of a needle than for a rich man to get into heaven."

Rush Limbaugh Calls Pope a 'Marxist' For Critique Of Inequality

Do Republicans even know the teachings of Jesus? For guys who run around waving the flag and thumping the bible, they seem to have no clue about the religious teachings from which they claim their beliefs and motives originate. 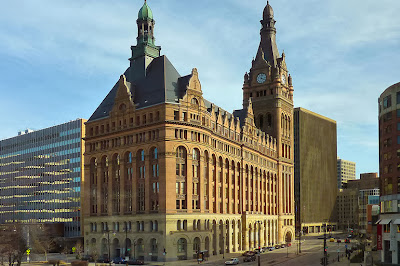 Milwaukee: With a design uniquely inspired by the Flemish Renaissance, Milwaukee’s City Hall is a breathtaking building both inside and out. Built in 1895 at a cost of $1 million, the City Hall has mosaic and marble flooring and was one of the first to feature an extensive open atrium. The building was completely renovated in 2008 at a cost of $66 million, and was declared a national historic landmark in 2004. (Photo: Wikimedia Commons) [source]
Posted by Ryan at Thursday, November 14, 2013 No comments:

Gambling With Civilization
20 Big Questions In Science
Median Wage Falls To Lowest Level Since 1998
Mathematics In "The Simpsons"
U.S. Government Is Not $16 Trillion In The Hole
Talgo Files Claim Against State
Why A Regional Tax Is Needed
The Myth Of The Exploding Federal Government
Collapse Of U.S. Infrastructure Spending
No Evidence Obamacare Forcing Large Numbers Into Part-Time Work
The American Health Care System Sucks
A War On The Poor
New Moves To Bail Out The Bucks
Posted by Ryan at Sunday, November 10, 2013 No comments: 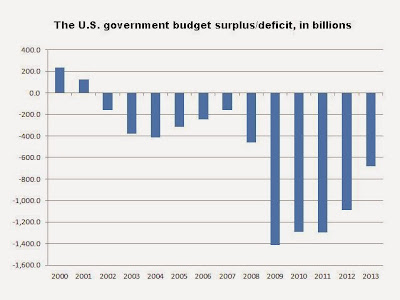 The federal government's 2013 fiscal year ended Sept. 30, though most of us were so busy focusing on the government shutdown that accompanied the new fiscal year that there wasn't much time to reflect on the year that had passed.

Now the Treasury and Office of Management and Budget is out with the final budget results. Surprise! The deficit fell quite a bit in 2013. The federal government took in $680 billion less revenue than it spent, or about 4.1 percent of gross domestic product. In 2012, those numbers were $1.087 trillion and 6.8 percent of GDP. That means the deficit fell a whopping 37 percent in one year.

This is the first sub-$1 trillion and sub-5 percent of GDP deficit since the 2008 fiscal year, which ended the very month that Lehman Brothers fell and a deep crisis set in.

Most of all, there was more revenue. Government receipts totaled $2.774 trillion, up $325 billion from 2012, and rising to 16.7 percent of GDP from 15.2 percent. That reflects in part a stronger economy that increased income and payroll taxes. It also includes the expiration of a payroll tax holiday that increased tax receipts, and higher rates for upper-income Americans agreed to for this calendar year.

There was less spending, amid the drawdown of U.S. involvement in Afghanistan, lower unemployment insurance benefits due to an improving economy, and the enactment government enacted budget cuts called for in the 2011 debt ceiling deal, including the sequestration automatic spending cuts that began in March. Overall outlays were $3.454 trillion, the treasury said, falling $84 billion compared with the 2012 fiscal year. That fall moves government outlays from 22 percent of GDP to 20.8 percent.

It remains true that there are longer-term challenges facing the U.S. government finances, particularly around rising health-care costs. But the reality is that much of the conversation around debt and deficits is missing this basic fact: Deficits are, for now, falling fast. If anything, too fast. Just Wednesday, the Federal Reserve concluded a policy meeting with a statement that asserted, as it has in the past, that "fiscal policy is restraining growth" and that its forecasts are "taking into account the extent of federal fiscal retrenchment over the past year." Independent economists outside the government have reached similar conclusions, and now worry that deficits will fall so fast as to undermine the recovery. 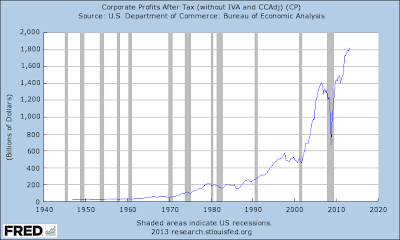 
From Nicole Belle, at Crooks and Liars:


You hear it on the lips of every single one of the Republican talking heads on every single Sunday news show:President Obama promised that if you liked your healthcare, you could keep it and HE LIED!!! (cue sobbing) Millions of Americans found out that they've been dropped from their healthcare! (hand wringing commences)

Color me skeptical that any conservative actually gives a flying fig to the healthcare woes of any average American, much less ones who had substandard policies.

But David Gregory has never come across a Republican talking point that he didn't love, embrace and swallow up whole to faithfully regurgitate to the masses. So he dutifully confronts Blue Cross and Blue Shield of Florida CEO Patrick Geraghty about the news that 300,000 Floridians have found their policies dropped because they fall below the minimum standards of coverage set by Obamacare. Problem was, Geraghty wasn't going to play Gregory's gotcha game with people's healthcare:

“We’re not cutting people,” Geraghty said. “We’re actually transitioning people. What we’ve been doing is informing folks that their plan doesn’t meet the test of the essential health benefits; therefore, they have a choice of many options that we make available through the exchange. And, in fact, with subsidy, many people will be getting better plans at a lesser cost. This really is a transition. In fact, the 300,000 figure is the entire year. So it’s really 40,000 people for January 1, and we’re walking them through that transition.”

Now, it's absolutely true that there will be a fraction of people who find that their costs have gone up, the specific number and amount is still up for debate. And if they don't qualify for subsidies, that will mean a higher out-of-pocket cost, at least in the short term. However, short-term partisan gains notwithstanding, the program will factor in long-term the inclusion of healthy, young people on the exchanges, which will help mitigate the ailing people who rushed for the initial coverage. Specifically, the re-insurance tax is being levied for the first three years is intended to help smooth that transition to allow for the long-term sustainability of the program.

But why would NBC News be interested in actually informing their viewers of the realities of the program when they can have their newscasters "sell" a misleading partisan argument instead?