Douglas Kane has an excellent article clarifying the discussion on business climate, taxes, best places to live, job growth and quality of life.

Lower taxes do not result in a better quality of life nor larger business or job growth.
Posted by Ryan at Saturday, March 27, 2010 No comments:

Pat McIlerhan is - again - defending the poor suburbs against the big, bad city. When Milwaukee wants a fair price for its water, when continued sprawl is pointed to as an environmental issue, Pat is there to label such as anti-suburban. No such counter claim (anti-city) is ever mouthed when policies - highway expansion, sprawl, autocentrism, etc. - hurt the city.

Pat writes, "Waukesha's problem is that its well water is tainted with radium, put there by God and declared unacceptable by the EPA." Hey, if that radium-laced, god-given water is just fine, Waukesha doesn't need Milwaukee's water. The EPA is obviously another liberal, overzealous regulatory body working in concert with the Democrats' plans to turn the U.S. into a communist nation. Waukesha, continue drinking your radium-laced, god-given elixir.

The idea that Milwaukee simply receiving money from the sale of water will solve all problems is juvenile and short-sighted. Sure, the extra money would help the Milwaukee budget. More money tends to help any budget. But the continued sprawl of Waukesha will hurt the region as a whole, while continuing metropolitan competition for new jobs and expansion. Until we have regional revenue sharing policies, whereby the region benefits from growth, rather than one municipality, it is a (nearly) zero sum game.

And, why must Milwaukee always be the bigger person (especially in allowing policies that primarily benefit other communities)? Where are the suburbs in supporting regional rail transit? Or anti-poverty programs? What the City wants, what might benefit a large portion of our poor residents, Pat dismisses. But anything the suburbs want, that is part of a larger natural progression. A blessing to us all which we would be fools to not support. Give me a break!

Pat then claims, "Milwaukee's revival will come not by forcing the most urban area in Waukesha County to hand over money." Yet that's exactly how the suburbs grew. By forcing city-dwellers to hand over their tax dollars to allow for highway expansion and home mortgages, after WWII, which fueled suburban growth.

He closes with the absurdity, "The region can thrive if its parts cooperate." So, Pat, tell me one thing the suburbs have wanted to cooperate on with the city? Cooperation is not a one-way street.
Posted by Ryan at Saturday, March 27, 2010 No comments:

Fine. We'll route rail around these communities. No charges, no more questions asked. When communities along the route are booming, and then these anti-rail suburbs want in, too bad, so sad.

But, city-dwellers and would-be rail-users would like to have our money back. The tax dollars which allowed the continued expansion of the highways (to the detriment of cities), and thus these anti-rail suburbs. But seriously...

Plenty of viable citizens didn't want highways dissecting their neighborhoods. But the U.S. marched forward building roads everywhere, transplanting homeowners and businesses. Supposedly this was in our best interest. Highways were a magical route to cheaper land (and environmental degradation). Never mind the problems with water availability, wetland destruction, sewer runoff, and pollution.

Well, we've learned something since then. Continued highway expansion is unsustainable and environmentally destructive. This isn't an all-or-none dilemma. The automobile and rail need to coexist. Most other communities realize this. Milwaukee is one of the last few metro areas to begin implementing a rail plan or system.

City folk have been forced to support (tax dollars) highways. Now the shoe is on the other foot. Suburbanites it's time to reciprocate; and rejoice in the positive consequences.
Posted by Ryan at Saturday, March 27, 2010 No comments:

Jobs:
18 Million Jobs by 2012
How A New Jobless Era Will Transform America
What Happened To The American Working Class?
Who Broke America's Jobs Machine?

Stimulus:
Fiscal Stimulus, The Definitive Answer: It Works.
In Defense of Deficits
The Effectiveness of Fiscal and Monetary Stimulus in Depressions
Posted by Ryan at Saturday, March 20, 2010 No comments:

Anti-Globalization and the U.S. Middle Class
Exports and American Prosperity
How Should We Gauge Manufacturing Importance?
Manufacturing Innovation
Thoughts on American Manufacturing Decline and Revitalization
Up From Globalism
U.S. Manufacturing is Not Dead
Posted by Ryan at Saturday, March 20, 2010 No comments:

Employers Rapidly Shifting Health Care Costs To Workers
Ryan's Response to Center's "Roadmap" Analysis Is Off Base
The Ryan Budget's Radical Priorities
When You Go Into The Details, People Support The Health Care Bill
Posted by Ryan at Sunday, March 14, 2010 No comments:

Globalization is inevitable. You can't stop it. It's good for all. Get on board or be left behind. To stay viable you need additional education and training.

There is only 1 job available for every 6 unemployed workers. So what exactly do these hucksters want people to retrain for? The economy continues to expand (even if that growth is slower). Workers have simply been cut off from the expansion. Capital has been expanding it's share of the profit, while labor has been left behind.

Most of the new jobs being created require an associate's degree or less. 85 percent of the population in the U.S. have at least a high school degree. Over 27 percent have a bachelor's. The percentage of high school and college graduates has increased since 2000. We have neither an unskilled nor an uneducated workforce. Education as a corrective to the employment problem seems minimally significant.

Technology has replaced jobs. This does not mean, as the 'job training' charlatans would imply, simple advances in automation automatically must equate to reductions in the workforce. Increases in productivity upon one variable in the production process can lead to increased needs for labor at another point in the process.

Historically, wages rose with productivity. It isn't an invisible hand or some magical market force pushing us along. It is conscious policy choice. The nanny state has become an inverse Robin Hood scheme. Rather than providing a safety net, ensuring that the least among us do not fall between the cracks, we now provide corporate welfare, ensuring asset price inflation.

We've transformed from a productive economy to an casino capitalism - filled with risk, speculation, and the endless pursuit of higher yields. Any downside is now covered by the public. This is alongside our funding of much of the research and development taking place, and other subsidization of many industries and sectors within the economy. 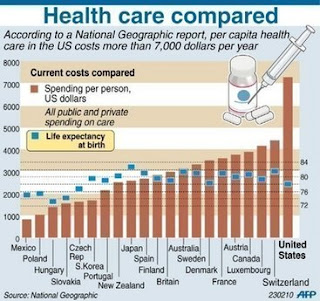 From Citizens For Tax Justice:

"Rep. Paul Ryan's GOP Budget Plan would collect $2 trillion less over a decade and yet require the bottom 90 percent to pay higher taxes."
Posted by Ryan at Tuesday, March 09, 2010 No comments:

May The Force Be With You

"The force of globalization can't be stopped," declares John Torinus in his latest Journal Sentinel rant. This type of thinking is typical of the business class. They believe in the magic of the market - an unstoppable force which always gravitates toward optimal outcomes. The problem with this paradigm is that it leads to a global race to the bottom, which ends up decreasing labor standards, while rewarding mobile capital.

He points to Mexico, and our trade relationship with them, and concludes it's a "major plus, a job creator." But, as I wrote in an earlier post, with the U.S. continually subsidizing farmers, we artificially lower the price of American agricultural exports and hurt developing countries. Such as Mexico, in one area where they can actually produce at a lower cost. Instead, our subsidized agri-business drives Mexican farmers off their land because of our low priced agricultural products. And, because of this, Mexican wages have actually fallen since NAFTA.

Torinus also claims, "Companies must go where the business is, not where you want it to be." So why are subsidies and tax breaks given out to lure companies? Just as the two Spanish companies (which Torinus mentions) whom are moving some operations to Milwaukee based on subsidies, not simply business nor competitive advantage (which Torinus doesn't mention).

I guess when one believes so blindly in a theory, which one also benefits and profits handsomely from, it's hard to let historical and empirical evidence get into the picture.
Posted by Ryan at Sunday, March 07, 2010 1 comment:

Pat is back attacking rail transportation.

He finds buses to be a stellar alternative. McIlheran claims, "And taxpayers do not subsidize the tickets." Whom does he think pays for the roads that the buses travel on? He also spouts, "Building the [rail] line commits taxpayers to unbounded expense." Just as building more and more roads commits taxpayers to their maintenance. Not to mention the cost of our addiction to oil and the automobile.

For Further Reading:
All Aboard
Blood on the Tracks
Money For Nothing
Note To Critics: Roads, Freeways Subsidized, Too
Road Warriors
Posted by Ryan at Saturday, March 06, 2010 1 comment:

In the past the Journal Sentinel has referred to the downsizing of America's manufacturing base as "the inevitable consequence of capitalism an democracy."

But now, lawmakers should "act to bolster nation's industrial base."

Better late than never, I guess.

For Further Reading:
NAFTA and the Myth of Free Trade
Wall Street Wants A Free Lunch, Not A Free Market
Posted by Ryan at Saturday, March 06, 2010 No comments:

Why must the effort to pass health care "be genuinely bipartisan"?

Barack Obama won the election. He has a mandate to do the many things he promised during his campaign. If the Republicans want to be on the wrong side of history, that is their problem. To keep wasting time in the hope Republicans will suddenly manifest a conscience is counterproductive. The Democrats are trying to get important legislation and programs in place for the American people. They are not elected to massage Republican egos.

Republicans feel there is no role for government, other than as a piggy bank for their cronies financial speculation. Bipartisanship is not possible. The Republicans will obstruct anything the Democrats want to accomplish. In the fractured, money-driven, two-party system we have, reconciliation may be the only way to pass meaningful legislation.