"In five out of these six states, Amazon cracked the top 20 list of companies with the most employees enrolled in the SNAP program," The Intercept reported, using the acronym for food stamps.

The numbers show that the company relies disproportionately on the program even accounting for its size: Amazon was the 28th largest employer in Arizona last year, but it ranked fifth for the number of employees enrolled in SNAP. It held the fifth slot in Pennsylvania as well, though it’s only the 19th largest employer. In Kansas, where Amazon isn’t even among the top 50 largest employers, it still ranked 17th for the number of employees using SNAP at the beginning of this year. Similarly, the company ranked 53rd in overall employment numbers in Ohio last year but 19th when it came to employees using SNAP. In Washington, where Amazon’s headquarters employ many white-collar workers, its employees were still the 17th most reliant on SNAP over the past four years.

For Further Reading:
Economic Development, Tax Incentives and The Plutocracy It's Creating
Posted by Ryan at Monday, April 30, 2018 No comments:

Republicans Offended By The Truth

Republicans: The Party of Bait & Switch

The Myth That Markets Get Prices Right Won't Die
Who Creates A Nation's Economic Value?
Donald Trump And The Next Big Crash
Kansas Rancher Explains How Trump Has Betrayed US Farmers
Michael Cohen Case Shines Light On Sean Hannity's Property Empire
The Dumb Money
Smearing Robert Mueller
A Critical Look At Suburban Triumphalism
Richard Florida Can't Let Go Of His Creative Class Theory. His Reputation Depends On It.
The GOP Has Become The Caricature The Left Always Said It Was
Trump's Company Is Suing Towns Across The Country To Get Breaks On Taxes
The Oil Pipelines Putting The Great Lakes At Risk
The War On Pensions Continues
Where The Great Lakes Compact Ends And Wisconsin Law Begins
Hidden Figures: How Donald Trump Is Rigging The Census
Posted by Ryan at Saturday, April 28, 2018 No comments:

Assembly Bill 128 prohibits government-provided health insurance plans from paying for abortions except in cases of rape or incest or to preserve the life of the mother. The restriction would apply to state workers and thousands of local government employees who get their coverage through the state Group Insurance Board.

Democrats said the measure was unnecessary because under previous state law state health plans would pay for an abortion only if a doctor has determined it is medically necessary. But supporters argued that the state needed to tighten the policy to protect taxpayers who have religious objections to their money being used in this way.

So now we're changing policy because some people have objections to how the money is used?

Give me a fucking break!

Religious organizations are already allowed billions in tax exemptions. I have objections to this. So can we start taxing churches now?

Walker's entire political mission has nothing to do with public service and everything to do with cronyism. Walker is only interested in rewarding his contributors and boosters.
Posted by Ryan at Saturday, April 28, 2018 No comments:

Good Riddance To Paul Ryan And His Cowardice On Immigration
Paul Ryan Will Retire As The Biggest Fake In American Politics
A Scam Of A Party Says Goodbye To Its Top Fraud
Paul Ryan Decision To Wait Until January To Retire Includes An Under-The-Radar Benefit
Paul Ryan's Whole Career Was About Sticking It To The Poor And Elderly
Even Now, Paul Ryan Really Doesn't Want To Talk About Donald Trump
With 'Longtime Dream' Of Tax Cuts For Billionaires Fulfilled, Paul Ryan Won't Seek Reelection
The Tragedy Of Paul Ryan
Paul Ryan Was A Failure, Even On His Own Terms
Paul Ryan Is Abandoning The Ship Before It Sinks
Fanatic, Fraud, Factotum: The Rise and Fall of Paul Ryan
The Man Who Killed Republican Reform
The Political and Very Personal Failure of Paul Ryan
Paul Ryan Abandons the Sinking Ship
Late Night Wasn’t Sad to See House Speaker Paul Ryan Go
Paul Ryan fails and bails
House Speaker Paul Ryan was the biggest fraud in American politics
Posted by Ryan at Friday, April 13, 2018 No comments:


“What do you want? If Paul Ryan isn’t good enough,” McCain shouted, and Behar said she wanted him out of the House. “But that’s not logical. We live in a democracy, we should want two healthy parties. They are against each other, but if Paul Ryan is the greatest sin, this is how we got Trump because if Paul Ryan and Mitt Romney and people like this are the worst politicians, then you deserve Trump. He was trying to fight for democracy and ideals. Now I have no idea.”

So, because the Republican party, which is supposedly full of so many good and well-meaning people, has been taken over by Donald Trump's all-encompassing shit-show, the "Liberals" deserve Donald Trump?

Because Republicans aided and abetted Trump in obtaining the White House, somehow the Democrats are getting what they deserve?

What kind of fucking logic is this?

During the presidential campaign, some Republicans did voice displeasure and disbelief in Donald Trump. Yet, as soon as Trump won, nary an oppositional word could be heard from Republicans. They went out of their way to make excuses for Donald Trump, his tweets, his policies and his inane ramblings. 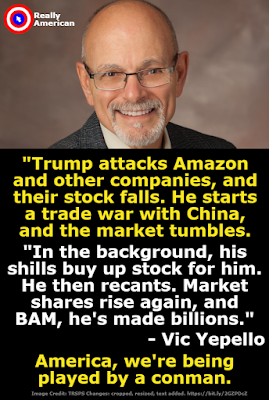 
For decades, the suburbs were seen as havens where people moved to escape the crowding, poverty, and problems of the inner city. Despite the pervasive stereotype, the suburbs were never universally affluent or white, and since the 2000s, as a majority of Americans have settled in suburbs, the “burbs” have become increasingly diverse, both economically and demographically. Poverty has concentrated increasingly in poor suburbs, surpassing low-income populations in urban and rural areas and upending assumptions about what it means to “move to opportunity.”

As Scott Allard points out in his book Places in Need, despite the fact that white Americans make up the majority of the U.S. poor, and that poverty now concentrates in suburbs, media and scholarly portrayals still disproportionately focus on the “urban poor,” and white people settle in white neighborhoods because they associate black residents with poverty.

Suburbs—where most Americans, impoverished or otherwise, live—are increasingly the locus of work-life conflict and economic insecurity.

And since suburban identity is culturally tied to a myth of the American dream, not to mention a long legacy of racism—a space where the affluent have historically segregated themselves from the black and poor—admitting there is a problem, and creating policies to help poor and middle-income struggling families, requires introspection and new political will.

As Storms Get Stronger, Building Codes Are Getting Weaker

As Storms Get Stronger, Building Codes Are Getting Weaker


A report being released on Monday shows Florida isn’t alone in easing up on building regulations even as the effects of global warming escalate. The Insurance Institute for Business & Home Safety examined building policies in 18 Atlantic and Gulf Coast states and found that despite the increasing severity of natural disasters, many of those states have relaxed their approach to codes -- or have yet to impose any whatsoever...

States’ reluctance to adopt building codes has worried federal officials, who are stuck paying to rebuild homes that get wiped out by natural disasters.

Plight of Phoenix: how long can the world’s 'least sustainable' city survive?

Phoenix gets less than eight inches of rainfall each year; most of the water supply for central and southern Arizona is pumped from Lake Mead, fed by the Colorado river over 300 miles away...

That river is drying up. This winter, snow in the Rocky Mountains, which feeds the Colorado, was 70% lower than average. Last month, the US government calculated that two thirds of Arizona is currently facing severe to extreme drought...

And yet despite the federal Bureau of Reclamation reporting in 2012 that droughts of five or more years would happen every decade over the next 50 years, greater Phoenix has not declared any water restrictions. Nor has the state government decided its official drought contingency proposal...

Meanwhile, despite enjoying more than 330 days of bright sunshine a year, Holway estimates that Arizona only derives 2-5% of its energy from solar power.


Emissions from the company’s operations in Mount Pleasant would rank among the highest in southeastern Wisconsin for pollutants that create smog, also known as ozone pollution, state documents show.


Which leads to an obvious question – why do numerous levels of Wisconsin government continue to bend over backward to shovel billions of tax dollars to help this one company, when we could pay to meet many other needs in the state that would benefit far more people for a much lower cost? The insanity of the Fox-con continues to grow with each story you read.


The Milwaukee Journal Sentinel has promoted, without questioning, a “report” on Foxconn by the Metropolitan Milwaukee Association of Commerce that seems more like a PR piece than a study. With the headline “Foxconn would provide $51 billion boost, report says,” JS reporter Rick Romell regurgitates the MMAC press release as if it were hard news, rather than a transparent attempt to sell the more than $4 billion in government subsidies going to the Taiwanese company.

Both Romell’s article and the MMAC release refer to a “report” done by it, but there is no link to any report in Romell’s online article (isn’t that a basic requirement for a newspaper story these days?) and the MMAC website reveals the analysis has no named author and consists of a one-page breakout of what it contends is the likely economic impact.

This is not a study. It’s more like a marketing tool by a Foxconn cheerleader.

Foxconn In Choppy Waters Over Plan To Drain The Great Lakes


Perhaps the biggest question, however, is whether the deal violates the Great Lakes Compact, a 2008 deal signed between the eight Great Lakes states and whose governing body includes Ontario and Quebec. The agreement aims to keep Great Lakes water from being diverted to areas far beyond the Great Lakes Basin, but it also requires that any water that is diverted be used to serve mainly the public, not industry.


The money spent on the Foxconn project will affect the state’s economy for the next several decades. The massive amounts of subsidies could create a higher tax burden and could divert resources from other state projects, especially because the deal would not begin to be a net return to the state until around the 2040s.

Even supposing that Foxconn employs the full 13,000 they say they will, if they fully meet capital investment requirements, the deal is far more expensive than is typical for incentives packages negotiated by the WEDC. For economic development programs that require job creation and capital investment, the WEDC, on average, plans to spend around $12,400 for each job created. The Foxconn incentive package would cost around $200,000 per job if only the tax credits are taken into account. That number rises to well over $300,000 if all aspects of the incentive package are included. This number could continue to rise if Foxconn does not follow through on its obligations, or if it continues to extract concessions from the WEDC and Governor Walker’s office (as they have already begun to do). Further, while Foxconn gets a large package of free land, infrastructure subsidies, and tax breaks, local businesses do not get the same. On top of that, Foxconn is not required to source materials from inside the state, so it will potentially bypass in-state suppliers.

The Foxconn Deal would place unnecessary strain on the local economy. It will give a large foreign corporation a huge subsidy at the expense of everybody else. This unfair transfer of state funds happens as 27% of roads are in need of repairs, and schools need $800 million in additional capital funding. It is important that state economic development programs are transparent in their implementation, and that all contractual obligations are adequately enforced. Further, it is important that the Wisconsin government meet current funding obligations before smokestack chasing.