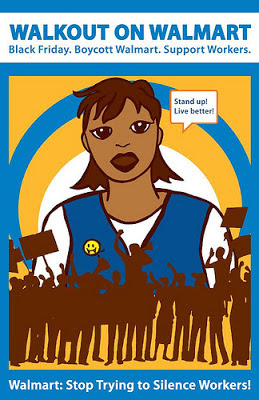 A classic example of Republicans getting an inch and taking a mile.

Most people simply want efficient provision of services. The number of public workers is not important to most taxpayers. The quality of service per tax dollar is what concerns taxpayers most.

And, whether the service is administered at the federal or state/local level doesn't really matter to most taxpayers. This distinction matters most to the politicos trying to maintain their fiefdoms. Taxpayers just want the service/program - regardless of which agency (state or federal) provides it.

Social Security, Medicare, police and fire protection, sewers, water, garbage collection, snow removal, roads and highways, trains, unemployment insurance, the court and judicial system - people want these services provided fairly and efficiently, they don't care which level of government performs the service. (Today - Thanksgiving - would be a good day to reflect on these programs which we collectively provide for each other.)

Republicans merely cling to this talking-point (we must shrink government) because it positions well alongside their never-ending "bad government" war chant. When it comes to the public sector, according to Republicans, less is always better.

Yet, for most citizens, less government means more inequality. Remember this the next time you hear some conservative blathering on about big bad government. The more government declines, the less services and programs (listed above) they can provide, and thus the quality of life of most citizens also declines. 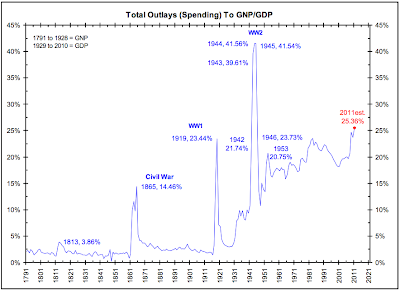 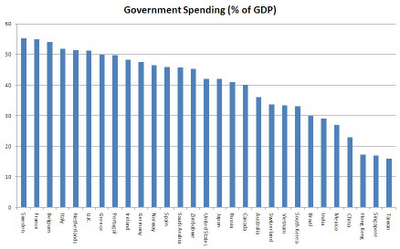 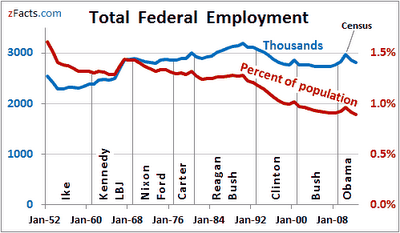 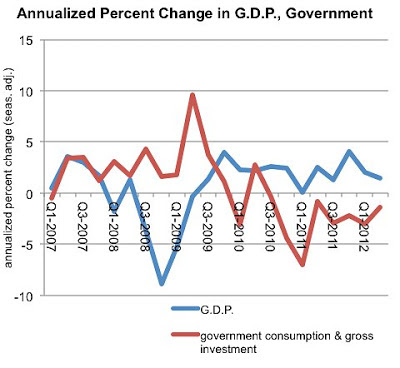 We Need A Stronger Labor Movement 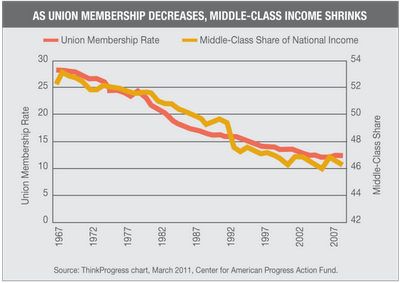 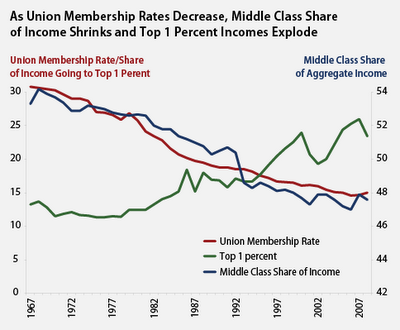 Scott Walker was recently in California at the Ronald Reagan Presidential Library & Museum giving a speech about his plans for Wisconsin. The Reagan Library, where the biggest Republican whores go to grovel before their sugar daddies and kingmakers. Yes, what better place to start talking about future Wisconsin legislative plans than in California? But, as they say, you've got to go where the money is. 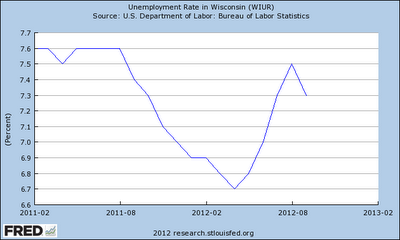 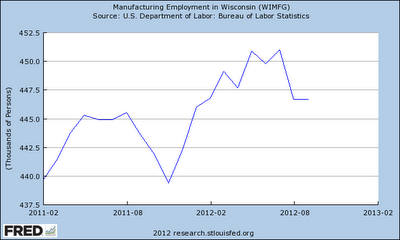 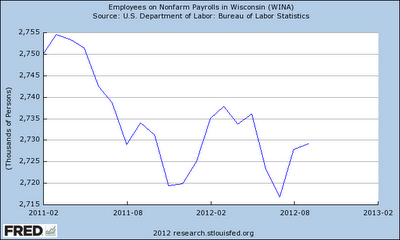 Economic success? Since Walker took over, Wisconsin is near the bottom in job growth among the states.

The Walker plan includes: tax cuts (of course), making Wisconsin's voucher program for private schools available to more students (even though research has shown the program doesn't produce any better results), and to eliminate "unnecessary" state regulations (vague, as usual). Basically, tax cuts and deregulation, alongside funneling more public dollars to unaccountable semi-private entities. Sound familiar? We've heard these recommendations from Republicans for decades now. What has it got us? Stagnant wages, volatile retirements, expensive health care, and increasing inequality.

"It's unfortunate he's going to try to continue to go down this war path of ideology instead of actually trying to address the real problems that we've got. It looks like he's putting his donors above his voters," said Chris Larson.

Truly unfortunate.
Posted by Ryan at Monday, November 19, 2012 No comments:

The Journal Sentinel has run yet another editorial pushing for a new basketball stadium. Yes, in the wake of a recession second only to the Great Depression, the thing we need most, right now, is a new sport stadium.

Even the Journal Sentinel's own Don Walker previously wondered how Bradley Center officials and boosters can have it both ways - the arena is uncompetitive and doesn't generate sufficient revenues, yet it is also is a huge economic driver for the region.

The editorial uses Miller Park as an example (to highlight the often repeated stadium subsidy threat), "Without a new Miller Park, the Brewers would not be in Milwaukee today. Now, with new ownership and a new stadium, the team brings in more than 3 million fans a year." The impressive sounding 3 million attendees (closer to 2.8 million, ranking 11th in MLB for 2012, down from 7th place in 2011) doesn't seem as impressive when you express it as 81 games with roughly 35,000 attendees per game (in a stadium that holds just under 42,000; a 17% vacancy rate).

And, so what? If the Brewers weren't in Milwaukee, we wouldn't have a baseball team. That's it. No baseball team - boo hoo! There isn't a single economic indicator the boosters can point to which shows Miller Park has had a positive economic effect on anything but the owners' and players' wallets.

Yet, without any evidence, without anything to back up the claim, the editorial gushes, "A new arena could spark economic development downtown, especially in the Park East corridor."

The editorial even eludes to the substitution effect (consumers spending at one place rather than another), "The Bucks need to have a plan in place to construct a new state-of-the-art facility by 2015 - a new arena that would be a year-round draw for downtown Milwaukee." The new stadium will end up being a draw from non-subsidized establishments, venues, and other entertainment options. Sure, more people may attend games for the first few years of the new stadium, but this will be due to the decreased patronage at other local establishments. It would be nice if the Journal would explain why we should be picking stadiums as winners over other restaurants, bars, and entertainment options.

The editorial went on to state, "[Herb] Kohl will not bear the entire cost of a new facility, and he shouldn't." A most perplexing line. The whole consideration of a new stadium is for the primary purpose of housing the Bucks basketball team - Herb Kohl's team! I would love for the Journal Sentinel to elaborate as to why the public needs to fund private enterprise. Just because the public is allowed to purchase tickets to an event at an establishment, that doesn't really make it a "public" facility (actually a state-owned building operated by a quasi-private board). [The discussion of whether or not to have a public arena - for concerts and collegiate sporting events is an entirely different discussion.]

Obviously unable to see the contradiction in their own thought, the Journal continues on, "Newer NBA facilities are self-sustaining and can make money even when the teams are not playing." If these are such sure-fire, game-changing, no-brainers, why does the public have to be involved at all? Yet another point where the logic of stadium subsidization falls apart.

They close with, "And so the clock is winding down on the Bucks. It's time for the city and business leaders to pull up and try a game-winning shot." Yes, when the evidence and data contradict your premise, simply use a hackneyed sports cliche to sell that sow's ear as if it were a silk purse.
Posted by Ryan at Saturday, November 17, 2012 No comments: 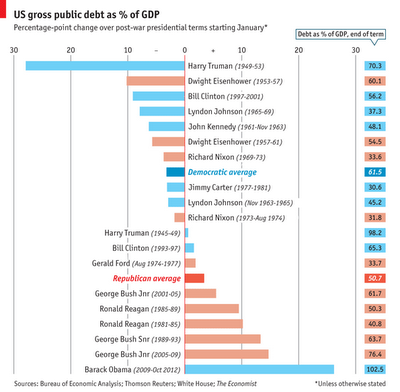 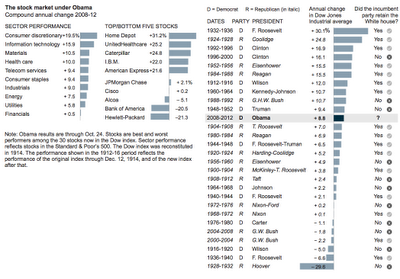 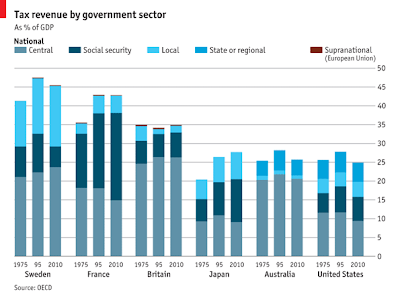 Closer Look At Obama's "$90 Billion For Green Jobs"
The Failure of Supply-Side Economics
Most Small Businesses Would Not See Tax Hit
Posted by Ryan at Sunday, November 11, 2012 No comments:

What A Night It Was 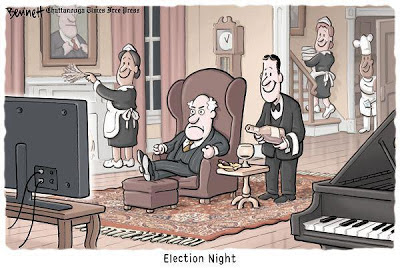 It seems whichever public office Scott Walker worms his way into, he leaves a stench of corruption, an ever-burgeoning suspicion, and a general wake of destruction.

From the increased costs and lawsuits from his attempted privatizations, his lying and duplicitous tactics, to the unconstitutionality of his bills, Scott Walker is (and has been) a disaster.
Posted by Ryan at Tuesday, November 06, 2012 No comments:

Don Walker begins the article stating, "By mid-2014, the community needs to have a good idea of what role the private and public sectors will play in the construction of a new, multipurpose arena in Milwaukee."

We hear tales about the omnipotent private sector and free market...so efficient, so perfect.

Simultaneously, we're also told how the government is wasteful, full of slackers, and just can't do anything right.

Yet (for some reason) the inefficient, know-nothing government needs to play a major role in the planning and funding of private sector activities.

Enter sport stadiums. These privately controlled initiatives are (supposedly) such game changers, job creators, catalysts, no-brainers. [They're not.] But, again, for some unexplainable reason, the inept public sector needs to invest heavily and absorb most of the risk.

Living wages, universal health care, pensions, unemployment insurance, Medicare, Social Security - that's just a bunch of welfare for moochers. But corporate welfare - such as the public sector picking up most of the tab to build teams new stadiums - is just good policy?

The question should be - why is the public sector involved, at all, in the financing of these private sector playgrounds? If Herb Kohl and the Bucks want a new stadium, go ahead and build one. But the public shouldn't have to shoulder most of the cost.

If the public is now responsible for the cost of building private businesses, shouldn't the public have a greater say in the operation - the pay scales, the retirement plans, the health care options, the environmental footprint, etc.? If the public sector is a necessary partner in construction, financing, and maintaining the viability of a business, shouldn't they have a representative voice in the organization making sure the public is getting back a fair return on their investment?

For Further Reading:
Basket Case
Buck The System
Buck You
Economic Engine Or Albatross?
Is There Anything A Stadium Can't Solve?
Overblown Bradley Center Impacts
Stadium Swindle
Will Herb Kohl Blackmail Milwaukee?
Posted by Ryan at Saturday, November 03, 2012 No comments:

Tax Cuts Do Not Boost The Economy

A recent Congressional Research Service report documented what many already knew: giving tax breaks to the rich helps concentrate wealth at the top, but it does not boost the economy (as reported here).

Taxes & The Economy: An Economic Analysis Of The Top Tax Rates Since 1945.
Posted by Ryan at Saturday, November 03, 2012 No comments: