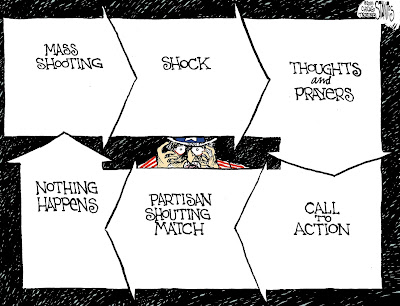 Water Safety, Lead Removal Plans Advance At Milwaukee City Hall
Watch 1998 Rudy Giuliani Torpedo 2018 Rudy Giuliani's Trump Arguments
Minnesota Outpaces Wisconsin, Report Says
Who Is The Freeloader: The Working Poor On Food Stamps - Or Corporations That Don't Pay Them Enough?
Trump Orders Help For Chinese Phone-Maker After China Approves Money For Trump Project
Journey Through The Land Of Extreme Poverty: Welcome To America
Scott Walker Has A Message For Wisconsin Voters: Here's Some Cash
All Betsy Devos Knows Is How To Profit From Schoolchildren
Enrollment Counts Expose Loophole In Wisconsin Parental Choice Program
Democratic Candidates For Governor Would End A Nation's First
Former DOT Head Is Scott Walker's Chief Critic On Transportation
The Anti-Roads Governor
The 9.9 Percent Is The New American Aristocracy
Posted by Ryan at Sunday, May 20, 2018 No comments:

Corporate welfare is abundant in Wisconsin.

As the Milwaukee Business Times reported:

The $2.85 billion in tax credits offered to Foxconn Technology Group is nearly 25 times more than the total incentives offered to the next 49 largest projects the Wisconsin Economic Development Corp. supported this year...

The remaining 49 projects in the top 50 are eligible for roughly $114.2 million in incentives, primarily through tax credits, although three projects are receiving loans. 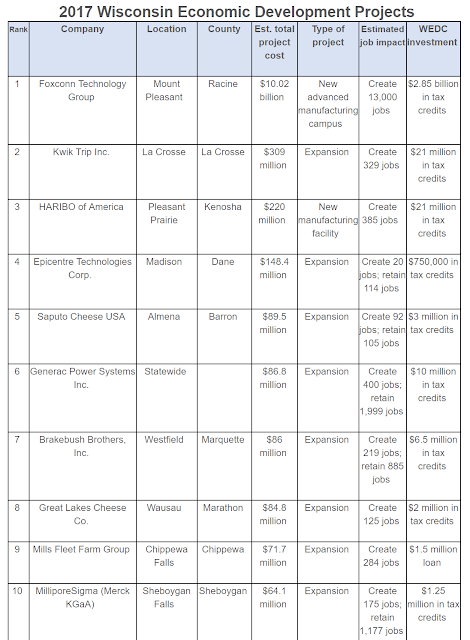 Here's a breakdown of the cost per job for the top 10 welfare recipients: 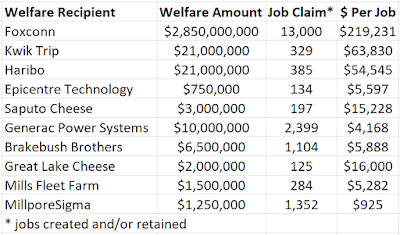 Scott Walker really loves handing out millions of Wisconsin taxpayer dollars to his corporate cronies. So, it's not that Republicans don't like spending money and using the government as a piggy bank, as they claim. They just prefer that low-income, working-class and middle-class go without, while giving most of the bounty to their corporate paymasters.

Republicans constantly bark about the Democrats "taxing and spending." Yet, Republicans do they same thing. The difference is that when Republicans do it, the benefits go to millionaires. And, instead of keeping taxes at a responsible level to pay for it, Republicans just run up the tab for someone else to figure out how to pay for it somewhere down the road.

Republican policies are bad at creating jobs. They're really just using taxpayers dollars to reward their contributors. Republicans tax cut fetish is only indebting the country and preventing us from making necessary improvements and infrastructure advancements.

We should be using our tax dollars to invest in better transportation options, greening of buildings, improving the electric grid and replacing our sewer and water systems. These, and other investments like these, are what will attract businesses and residents. This is what a broad-based plan for shared prosperity looks like.

Rather than short-sightedly picking winners and losers - the crony capitalism bribery that is the Republican plan for economic development - we should be making the general investments in our society (schools, workforce) and our infrastructure (road, trains, airports, water, energy) which benefits all and enables growth for the long term.
Posted by Ryan at Saturday, May 05, 2018 No comments:

Scott Walker Is A Creep