What do the top ranking states - in Federal spending per dollars of Federal taxes - have in common? 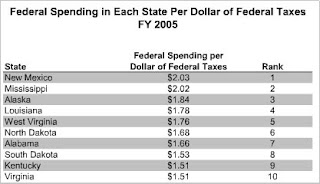 The biggest "welfare queens", as far as states are concerned, are conservative states.

Another great example of the never-ending hypocrisy, and total delusion, of the right-wing.

For Further Reading:
Another Difficult Year For States
Stimulus Spending By State
Posted by Ryan at Sunday, December 19, 2010