Looking at unemployment in Wisconsin, the Midwest, the Great Lakes Region, and the United States, we see that, comparatively speaking, Wisconsin has weathered this economic storm quite well. Wisconsin remained extremely viable during a horrendous economic downturn, as gaged by its ability to hold employment-decline to a minimum.
With unemployment at 7.6% in Wisconsin versus 10% for the Midwest, 9% in the Great Lakes Region and 9.5% for the entire U.S., Wisconsin has endured thus tumultuous time 17th best among the states and D.C.. We are doing some things correctly here in Wisconsin. For all the negativity and media-grabbing headlines, we need to remember Wisconsin is a great state to live in, and the state really does appear to work quite well, comparatively, for its citizens. 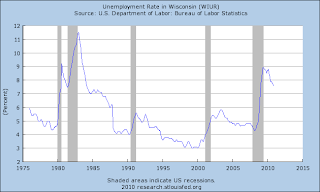 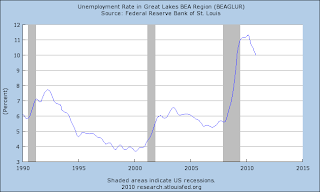 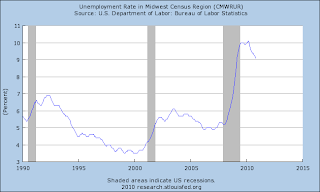 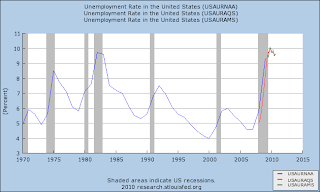 One indicator does not equate to nor denote a perfect world. Wisconsin is not at full employment. But, for all the mudslinging and vitriol swirling about the policy spectrum, this is one metric that we can at least say we're in the top third. Not the best, but far from the worst. So, we've admirably persisted through a tough time. Relatively speaking, we've done better than many other states. The work isn't done, but we have many positives to build upon.
Posted by Ryan at Wednesday, December 29, 2010