Plutocrats In A Bubble

In the flurry of the primary election, Republicans have stayed on message  - repeating talking-points to move the discussion their way. Two things seemed to be parroted the most - government spending is out of control and public workers need to sacrifice their fair share.

For anyone with access to the internet, these myths are easily dispelled.

As shown in the graph below, spending has been on roughly the same trajectory for the last decade. 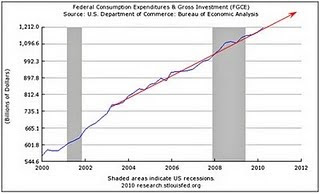 The whole discussion of public workers and unions has been turned on its head. Instead of using the gains of labor as a floor for employment in this country, we are slowly picking away worker rights. Somehow, a living wage, decent health care, and a respectable retirement became "too much."

Between 1979 and 2007 the top 1% took home 38.7% of income. They are the ones we should be calling on to pay their fair share. The majority of workers have seen their wages stagnate (whether they are private or public). The median wage, for years, has been lagging economic growth. Yet, the wealthiest have been seeing record gains in income year after year. Inequality has reached an all-time high. 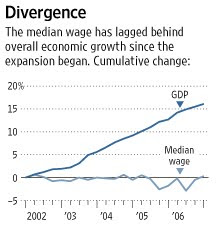 It's almost unimaginable that tax increases are never mentioned. The most obvious reason they are not is because Republicans have successfully tied tax increases for the top 2% to the bottom 98%. Getting the wealthiest among us, who've seen all the rewards from increased productivity over the past few decades, to pay more is out of the question. As we've all worked harder and harder we've seen less, while the CEOs and executives have usurped the gains of our increased productivity. Their earnings are booming, while ours are sinking. Inequality is at it highest recorded level. Yet, comically, and absurdly, it's the worker making $40,000 per year who must sacrifice. 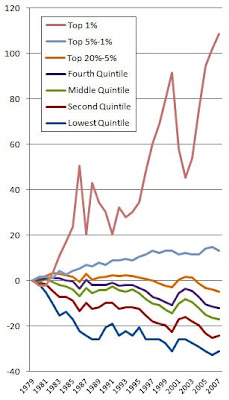 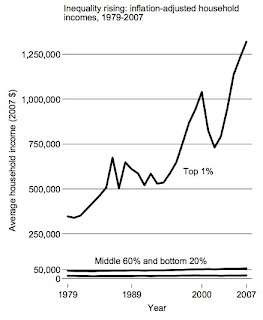 Some public workers do earn a good living. There's no doubt about that. But, it must also be understood that they have put in years of service. Don't most workers expect to be making more money where they work after working there for decades? (The average state worker has 17 years experience and makes $49,500 per year.) There was a time when loyalty and commitment meant something. And, we should also remember, the public sector is proportionately more educated than the private sector (48% versus 23% nationally, 60% versus 30% in Wisconsin). So, we should expect certain positions to have better pay. Public workers are professionals: law enforcement and the court system, teachers and professors, and health care and medical professionals, to name a few. Regardless of this, when public and private sector workers are compared with regard to experience and education, public workers earn LESS.

Republicans continually talk of the good old days. A bygone era when America was great. The one thing they never mention is that taxes were also much higher back then, too. In fact, the highest marginal rate was between 70 and 90 percent during the period. Since then, taxes have decreased the most for the wealthiest. Their income has increased the most, and their taxes have gone down the most. That is not fair at all. It's even more of a joke when our national discourse is currently concerned with cutting workers wages, ending collective bargaining, repealing health care, and privatizing Social Security.

We know who has the money. Why can't we just get it from them? Rather than continuing to punish workers and the programs the majority of our society count on.